Joe Jonas's celebrated his birthday in a truly suave fashion, complete with a cake that had his and Sophie Turner's figurines. 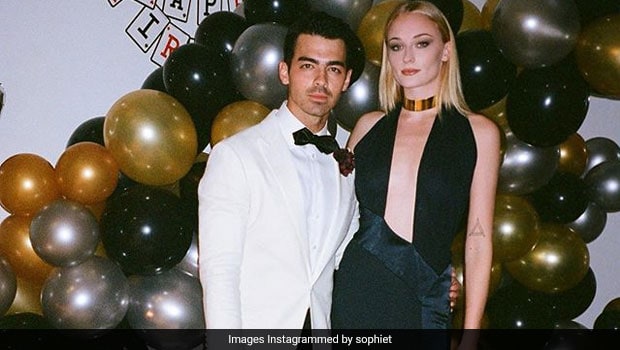 American popstar Joe Jonas recently celebrated his 30th birthday and the party became the talk of the town. Jonas, who got married to British actor Sophie Turner earlier this year, threw a Bond-themed birthday party for his friends and family and the event made it to the headlines in publications around the world. Joe is a part of the pop music band Jonas Brothers who were a teen sensation but had disbanded later. The brothers - Joe, Kevin and Nick - recently came back together and started releasing hits together. One of them -'Sucker'- also featured the brothers' wives Priyanka Chopra Jonas, Sophie Turner and Danielle Jonas and it went on to top English music charts.

Joe Jonas's celebrated his birthday in a truly suave fashion, complete with a cake that had his and Sophie Turner's figurines. There was even a 'Game of Thrones' twist to the birthday cake - Joe's figurine could be seen sitting on the now iconic Iron throne while Turner's figurine was seen standing next to him. The picture was shared by brother Nick Jonas on his Instagram Stories and was subsequently re-shared by fan accounts on their feeds.

Also Read: Priyanka Chopra And Sophie Turner Are BFF Goals As They Bond Over Pizza In Switzerland: See Pic

Doesn't that look simply fabulous? Sophie Turner had also surprised her husband by crashing Jonas Brothers' concert in the middle of a performance. A video of the birthday surprise showed the audiences in Washington D.C. serenading Joe Jonas while Sophie and Danielle light the candles. Joe cut the cake and took a big bite out of it, much to the delight of his fans.

The video was shared by Joe Jonas on his Instagram page and he captioned the post as, "Couldn't have asked for a better night, thank you all so much. Nothing better than doing what I love with my loves on my birthday."

Also Read: Priyanka Chopra's Lavish 5-Tier Birthday Cake Was 'As Big As Her'