Woah! THIS Is How Much Nick Jonas Reportedly Spent On Priyanka Chopra Jonas's Birthday Cake

Media reports have emerged about the alleged price of Priyanka Chopra's birthday cake, sending the internet abuzz with chatter. 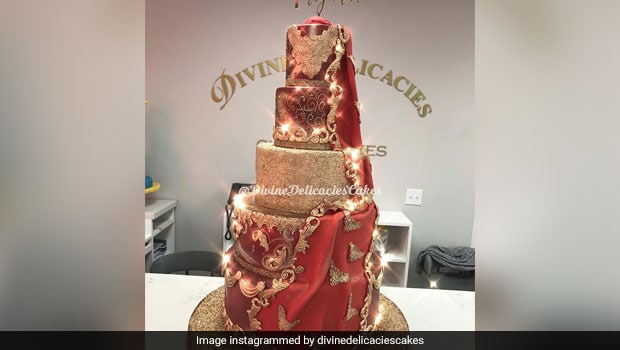 Bollywood actor Priyanka Chopra Jonas has a penchant for making it to the headlines and becoming the talking point of the town for some reason or the other. The desi girl recently stunned her fans with extended birthday celebrations, which seemingly stretched over several days and that saw the actor and her singer husband Nick Jonas, partying on a cruise ship with friends and family. Chopra's sister, Parineeti Chopra, also joined the celebrations, as did her mother Dr. Madhu Chopra. The birthday girl, who turned 37 this year, was seen frolicking in the waters of Miami. If the celebrations weren't luxurious enough, the diva also cut a beautiful 5-tier birthday cake that matched her birthday outfit. The chocolate and vanilla cake was decorated in intricate, ornate gold designs over a royal red cover of fondant.

Fans' eyes lit up when they saw the gorgeous cake, which justifiably made headlines around the world. Now, reports have emerged about the alleged price of Priyanka Chopra's birthday cake, sending the internet abuzz with chatter. A report by entertainment website PINKVILLA claimed that the cake cost a whopping USD 5,000 or approximately INR 3.5 lakhs! The report stated that it was Nick Jonas's idea to get the cake made in red and gold as that was the colour scheme of Priyanka's birthday outfit as well. The cake was ordered by Jonas and the bakery 'Divine Delicacies' in Miami created the beautiful and lavish cake.

Also Read: Happy Birthday Priyanka Chopra Jonas: Diet Tips From The 37-Year-Old That You Can Steal

The PINKVILLA report also claimed that the bakery had to make the cake in a hurry as the order was placed last-minute and that the bakers worked a full 24 hours to create the opulent cake. The cake truly looks nothing short of a work of art and we can only imagine how divine it must have tasted! Well, we certainly feel the cake matched up to Priyanka Chopra Jonas's love for high-fashion.