Priyanka Chopra And Sophie Turner Are BFF Goals As They Bond Over Pizza In Switzerland: See Pic 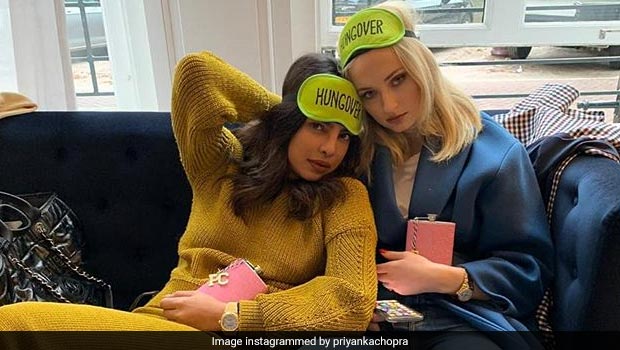 Bollywood and Hollywood actor Priyanka Chopra has been the talk of the town, ever since the details of her fairy-tale wedding to American singer Nick Jonas were revealed. Chopra's fans are still dazed in the aftermath of the beautiful wedding, which took place in Jodhpur's Umaid Bhawan Palace. Meanwhile, the newlyweds have been vacationing with their families in Switzerland. Priyanka Chopra Jonas and Nick Jonas have been making the world fall in love with them one frame at a time, as they continue to share loved up pictures of themselves from the picturesque snow-covered mountains of Switzerland. The couple's photos have been going viral and they also feature Joe Jonas with fiancee Sophie Turner, who had also turned heads by her impeccable sartorial sense during the Chopra-Jonas wedding.

The camaraderie between Priyanka Chopra and Sophie Turner is evident, as the two beauties pose away to the delight of their fans, from around the world. Post the New Year revelry, Priyanka Chopra now seems to be spending some quality time with her future sister-in-law, and the proof is in the picture that she posted on her Instagram stories, where the two were bonding over pizzas in Switzerland. The picture shows Priyanka Chopra and Sophie Turner gorging on some delicious thin crust pizza and Chopra captioned the picture as "Aftermath with @sophiet."

The picture was posted by Priyanka Chopra yesterday. We all know those hungover cravings for pizza and other greasy, cheesy foods, all too well! Looks like Priyanka Chopra and Sophie Turner aren't afraid to give in at all. Chopra and Turner had made headlines earlier as well, when a video of the former carrying the latter on her back during her bachelorette party had gone viral. The video showed Turner piggybacking on Chopra after being too tired to walk in her heels.

Also Read: This Dessert At Priyanka Chopra's Bridal Shower Was A Tribute To Nick And Priyanka's Love Story!

These two are straight up goals! Wouldn't you say so?