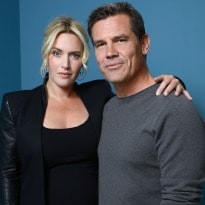 Josh Brolin, known for villainous roles, makes a great pie both on and off screen, Kate Winslet, co-star of his latest film, said Saturday, softening his tough guy image.

The American actor -- who has played loathsome characters in such films as "Milk," "American Gangster," "Wall Street: Money Never Sleeps" and the Coen brothers' Academy Award-winning "No Country for Old Men" -- perfected his baking skills for a scene in director Jason Reitman's "Labor Day."

The film, based on a Joyce Maynard novel, premiered this week at the Toronto film festival. In it, Brolin plays an escaped convict taken in by a reclusive single mother, portrayed by Winslet.

"Josh got into his character and, I can say, is an excellent cook of pies," Winslet told a news conference.

"I don't know about his ability to make chili or anything else, but he certainly is an excellent pie baker."

Reitman concurred, and according to Brolin, the crew on the set were also very pleased with his flaky crusts.

But the actor may have taken preparing for the scene a tad too far, according to Winslet.

"He got a little bit obsessive with making pies," she said. "He would get up at four in the morning and he would come to work with a box and say, 'I've baked you a pie.'"

Brolin would also email pictures of his pies to friends and others.

Five weeks and many, many pies later, Winslet and the rest of the cast and crew had had their fill. Reitman, for one, said his fridge was full."Josh is a picture of masculinity, but you'd show up at his cottage and he'd be so excited to tell you about the crust he achieved that day or the juices that were coming out of the pie," said Reitman.

"He'd give pies to everyone and it really was exciting at first, but later on you'd see a pie and go running."

Still, the pies kept coming throughout the nine-week film shoot -- for Winslet, for Reitman, for the crew and even the hair and makeup department.

"We lived on pie," said Winslet.

Brolin confessed that it all started out of "abject fear" of not being able to do the pie scene with Winslet, described in the script as "the greatest pie making scene in cinema history."

Listen to the latest songs, only on JioSaavn.com
He said he burned the top of the pie on his first attempt while the bottom was uncooked.

The reason? He had accidentally turned the oven to broil.