Also known as Shyama Puja, Kali Puja is celebrated on the new moon day or Amavasya of the Hindu month Kartik. 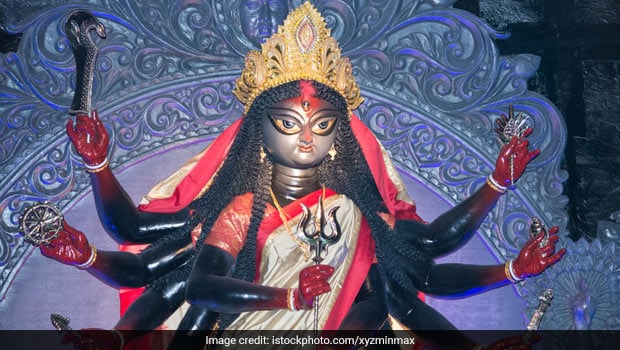 While a good part of the country is engaged in Diwali celebrations, people in east are prepping up for Kali Pujo. Dedicated to the worship of Goddess Kali, the festival is one of the most significant festivals of West Bengal, Assam and Orissa. Kali Pujo usually coincides with Diwali, and this year too, Kali Pujo would be celebrated on 27th October 2019. Also known as Shyama Puja, Kali Puja is celebrated on the new moon day or Amavasya of the Hindu month Kartik. Devotees make several offerings to the Goddess and stay up all night praying. The overnight vigil is inundated by chants and tales about the Goddess' courage and bravery. Pandals may also host cultural programs and magic shows to keep everyone entertained.

(Also Read: Beware! Your Diwali Mithai May Be Adulterated)

It is believed that the first large scale Kali Puja was hosted by Krishnachandra of Navadvipa, way back in 18th century. The festival  gained massive popularity in 19th century courtesy Krishanachandra's grandson Ishvarchandra alongwith few other Bengali elite who took the legacy forward. Soon wealthy landowners or Zamindars began hosting Kali Puja on grand scale and it became one of the biggest festivals of Bengal and Orissa. Beyond Bengal, many Bengalis celebrate Kali Pujo at Kali Baris/temples. Devotees install clay idols of the ferocious goddess in special pandals. Kali is said to be a manifestation of Durga, according to scriptures the ten-armed Goddess embodies 'shakti'. According to legends, she goes on a destruction spree, annihilates demons, but is also very merciful and kind towards her true devotees. The Goddess is worshipped all night with ritualistic rites and mantras. She is offered her favourite red hibiscus flowers and a bhog of rice, lentils, sweets and fruits. The idol is dressed up in a special sari as 'Adya Shakti'. The Pandals also usually feature images of Lord Shiva (Kali's consort), Ramakrishna Paramhansa and Swami Vivekananda, two of Kali's biggest devotees.

Foods And Prasad Associated With The Festival

As part of bhog, offering rice, lentils, sweets is made to the Goddess. Few communities may also offer fish and meat. The bhog is served to the devotees who have gathered. Khichdi , mixed veg,  luchi (a form of puri) and aloo dom (spiced potato) are some of our most favourite bhog delicacies.
A night before Kali Puja, Some Bengalis also celebrate Bhoot Chaturdashi. A part of the ritual requires them to light 14 lamps or diyas at home. It is believed that these 14 lamps help ward off evil spirits. Some say that these diyas are also lit in remembrance of past 14 generations of ancestors.
Another very interesting ritual of Bhoot Chaturdashi is of eating fourteen types of saag or green leaves or choddo shaak. These vegetables are cooked and then eaten by the family together.