Adhirasam: A Diwali Special Sweet Treat For Your Festive Spread

Given how traditional Indian sweets have travelled across regions and states, it's tough for any city to stake a claim over any particular sweet that holds good for the adhirasam. 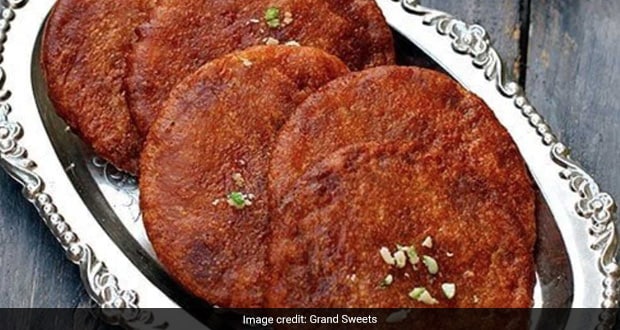 Adhirasam has a strong connection with Diwali in south of India.

Mysore pak is probably one of the bestsellers in the Chennai Domestic airport. Many travellers buy the melt-in-your-mouth version - the Mysurpa - from Krishna Sweets as they head to their home city from Chennai. A few weeks ago, a friend of mine and a food writer from Mumbai wanted a 'sweet suggestion'. She was keen to take back a box of a quintessential Chennai sweet. That's when I suggested her to go to the closest Grand Sweets outlet for adhirasam. Given how traditional Indian sweets have travelled across regions and states, it's tough for any city to stake a claim over any particular sweet that holds good for the adhirasam.

This is a sweet with a strong association with Diwali across homes in Tamil Nadu. But it's certainly not a sweet that the state can call its own. Kajjaya in Kannada, Ariselu in Telugu - the adhirasam is deeply embedded in the culinary history of many southern states. K.T. Achaya, who authored Indian Food - a Historical Companion, states that the adhirasam made an appearance in Tamil Nadu during the reign of the formidable Chola dynasty almost thousand years ago. There are inscriptions from the Vijayanagar empire that suggest it was a popular sweet dish in Krishna Deva Raya's royal kitchen. It's not just a food of the royals but also a food of the gods, and is part of the temple offering (prasad) at many temples and also poojas at homes.

As a child, it was always part of my Diwali wish list when my mother asked for my list of sweets that she would painstakingly prepare from scratch. This was one of those rare sweets that she was slightly intimated by. The cooking process is labourious and requires skill and experience in equal measure. This deep-fried snack is essentially a combination of two ingredients - jaggery and rice flour. The flavour is enhanced by the quality of the oil; this is something I discovered when I sampled adhirasam at a nondescript sweet shop in Madurai. Shri Vannitangam Corporation was one of the many discoveries I made as part of a food walk in the city's traditional quarter built around the legendary Madurai Meenakshi Temple. This version with fresh, cold-pressed groundnut oil was delicious.

The Madurai version I tried was slightly puffy compared to the flatter disc that is sold in shops like Grand Sweets and Suswaad in Chennai, both of which are among the best places in the city to try this traditional sweet. There's also a sakkarai (sugar) adhirasam made with sugar instead of jaggery but it's not as popular. Many homes in the Chettinad belt, near Madurai, one of Tamil Nadu's culinary hotspots, have also perfected the adhirasam. The Park Hotels has reimagined one of Chettinad's heritage homes that the locals called Vaadhyar's House (teacher's house; this has been home to generations of teachers) into a cafe. It's also where we sourced this recipe that you can try at home:

Also Read: 8 Unique Desserts You Will Find Only In India

The quality of the jaggery and the oil (try and source cold-pressed groundnut oil for the best results) plays a big part in forming the flavours. Many homes still use the traditional method where the rice flour and jaggery mixture is allowed to ferment for upto five days by placing it in the sunlight during the day time. But you can skip that step and still make a delicious version of the adhirasam with our recipe. Adhirasam loosely translates to boundless mirth or sweetness; this sweet certainly lives up to its name.