Kids Still a Target for Marketers of Sugary Drinks: Report 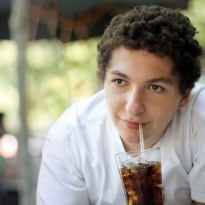 Children and teens are seeing fewer ads for sugary drinks on television, but they remain a prime target for marketers through other means such as product placement and social media, a report released on Wednesday found.

The report, conducted by researchers at the Yale Rudd Center for Food Policy and Obesity, said kids ages 6 to 11 years old viewed 39 percent fewer television ads for sugary drinks in 2013 than in 2010. Teens saw a 30 percent drop. The number of ads found on websites mostly visited by children also declined during the period, according to the report. The report was based on Nielsen data on advertising exposure from 2013 and was funded by the Robert Wood Johnson Foundation.

But Yale researchers said that beverage companies continued to reach children and teens through sites like Facebook and Twitter as well as mobile apps, and much of that marketing promoted unhealthy products. (Parents are warned to steer clear of sugar-filled 'healthy' drinks)

"They're trying to talk about offering healthier choices and lower sugar products, and that's really great," said Jennifer Harris, the lead author of the report. "But if they keep marketing their high-sugar products to children and teens, they can't say they are being a part of the solution." (Fizzy drinks as harmful as drugs for teeth)

Under a voluntary program called the Children's Food and Beverage Advertising Initiative, major soda companies do not advertise beverages other than juice, water or milk-based drinks to any audience that is comprised predominantly of children under 12. The Yale report examined total advertising, not just advertising on children's programming. Researchers found that with some brands, children's exposure to unhealthy drinks has increased since 2010. Preschoolers saw 39 percent more television ads for PepsiCo Inc's sugary drinks. Meanwhile, both teens and kids ages 6 to 11 saw more television ads for Red Bull GmbH.

A Pepsi spokesman called the findings "misleading" and said in a statement that "the truth is thatPepsiCo is, and will continue to be, a responsible marketer, particularly when it comes to children." (Sugar drinks may harm the liver)

Promoted
Listen to the latest songs, only on JioSaavn.com
The American Beverage Association, an industry trade group, said the authors of the Yale report do "not adequately differentiate between marketing to children, who are widely viewed as a special audience needing particular care, and marketing to teens and general audiences."