Make your own fresh pasta 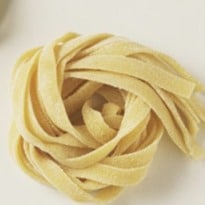 Many years ago I owned a pasta maker; a hand-cranked job with rollers that turned egg-rich dough into silk-smooth tagliatelle. But cleaning it was a pain and I am lazy. One day I took it out and found it was a mass of mould and rust. That was the last time I touched it. But you can do almost as good a job with a rolling pin and a bit of elbow grease.

If you're making some sort of ribbon pasta, for each person you'll need one large, very fresh egg and 100g type-00 flour - sometimes labelled as pasta flour. (If you like your pasta a little chewier, you can replace some of the flour with its grittier cousin, semolina.)

Lightly beat the eggs, combine with the flour and a pinch or two of salt, and knead for 5-10 minutes, depending how much you're making. To keep the mess to a minimum, you can do all this in the same large bowl.

You'll end up with a stiff, dense dough, but don't worry about that. Leave it for half an hour or so, covered in clingfilm, and it will become more manageable. While this is going on, flour a rolling pin and your work surface, and clear plenty of room.

Once your dough has rested, divide it into two portion-sized lumps and roll out each in turn, lightly flouring the work surface, dough and rolling pin whenever it looks like it might stick. You'll need to put your back into it, as you want the pasta to be as thin as possible - about 1mm for plain, a bit more for filled. What does that look like, if you don't have a ruler to hand? The thickness of one to two credit cards. If you find it difficult to roll it this fine, next time add a splash or two of olive oil when mixing the dough; this should make it more supple.

To finish, use a sharp knife or pizza cutter to slice the pasta into strips for tagliatelle or fettuccine, circles for mezzelune, squares for ravioli ... Add any fillings and cook immediately if possible; otherwise dust with flour, leave to dry for half an hour and store, covered, in the fridge.

Phil Daoust is a food writer based in England and France. He started making his own ingredients because it was more fun than shopping. twitter.com/philxdaoust