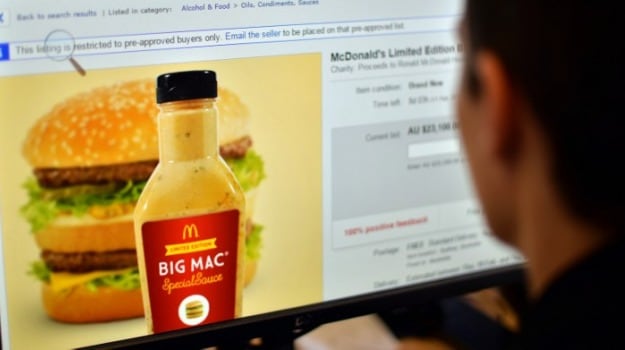 Fast-food giant McDonald's is giving Australians the opportunity to buy a bottle of the special sauce used on their famous Big Mac -- the only problem is it will cost at least Aus$23,100 (US$18,000).

The 500 ml 'Limited Edition Big Mac Special Sauce Bottle #1 of 200' is being auctioned on eBay with all proceeds going to charities run by the global chain to help sick children and their families.

(McDonald's Disguises Itself as a Health-Food Cafe)

"This bottle is #1 of only 200 being produced worldwide, and they won't be sold in restaurants," the eBay ad reads, adding that the sauce could be used to improve anything from goulash to cupcakes.

McDonald's said the special sauce was one of the company's most iconic ingredients, and customers often ask where they could buy it -- but until now it was trapped between the buns of a Big Mac."We're excited to be auctioning off the first-ever bottle of Big Mac sauce for a cause we are passionate about," chief marketing officer for McDonald's Australia Mark Lollback said.

(There are 19 Ingredients in Your McDonald's French Fries!)

The auction for the sauce -- whose ingredients are known to include relish, mustard, distilled vinegar, onion, garlic and salted egg yolks -- will run until February 9. Australian customers of McDonald's will also be able to buy 25ml tubs of special sauce at restaurants around the country in February, the company said.

McDonald's is the world's largest burger chain, with 36,000 outlets in more than 100 countries, but changing consumer tastes are proving a challenge as are agile new fast-food chains, compounded by a slump in sales in China and Japan after a scare over food safety.