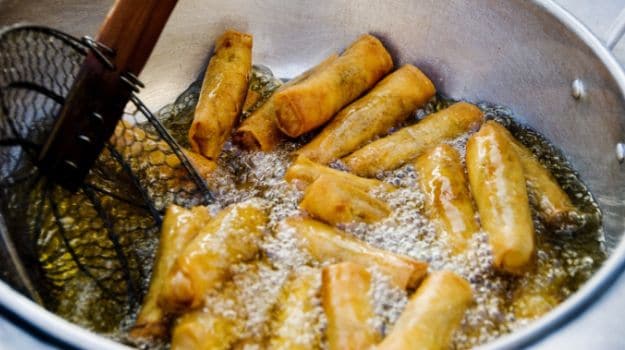 People who eat lots of fried food and sugary drinks have a 56 percent higher risk of heart disease compared to those who eat healthier, US researchers said Monday. The findings in Circulation, a journal of the American Heart Association, were based on a six-year study of more than 17,000 people in the United States.

Researchers found that people who regularly ate what was described as a Southern style diet - fried foods, eggs, processed meats like bacon and ham, and sugary drinks - faced the highest risk of a heart attack or heart-related death during the next six years.

"Regardless of your gender, race, or where you live, if you frequently eat a Southern-style diet you should be aware of your risk of heart disease and try to make some gradual changes to your diet," said lead researcher James Shikany, a nutritional epidemiologist at the University of Alabama at Birmingham's Division of Preventive Medicine.

(Load Up on Fish Oil Pills: It Can Boost Heart Health in Older Adults)

"Try cutting down the number of times you eat fried foods or processed meats from every day to three days a week as a start, and try substituting baked or grilled chicken or vegetable-based foods," advised James.

Promoted
Listen to the latest songs, only on JioSaavn.com
The study included both white and African-American men and women aged 45 or older, who did not have heart disease when they began the study. Participants enrolled from 2003 to 2007. They were first screened by telephone, then given an in-home physical exam, then they answered a food frequency questionnaire.

(Coffee For a Healthy Heart: 3-5 cups a Day May Cut Risk of Heart Disease)

Comments"Every six months, the participants were interviewed via telephone about their general health status and hospitalizations for nearly six years," said the study. Participants fell into five different eating groups, including the Southern style eaters; those who favored convenience foods like pasta, Mexican food, Chinese food, mixed dishes and pizza; the "plant-based" pattern which was mostly vegetables and fruits; the "sweets" pattern; and the "alcohol/salads" group which tended toward by beer, wine, liquor, green leafy vegetables, tomatoes and salad dressings. The Southern-style eaters were the only ones faced with a higher risk of heart disease.