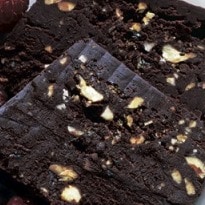 Baked apples with dates, banana ice cream and more in the final part of Observer Food Monthly's celebration of Nigel Slater's first 20 years with the Observer

A cake for serious chocolate fans only. I serve this in extremely thin slices. The cake needs something to offset its extraordinary richness. Fresh raspberries work beautifully.

You will also need

To make the praline, put the shelled nuts in a shallow pan and toast over a moderate heat until they are fragrant and a deep, golden brown. (If your hazelnuts still have their brown skins on, rub the nuts vigorously in a tea towel until the skins flake off, then toast the nuts once more.)

Put the sugar in a small, heavy-based saucepan (it will burn in a thin one), place over a low to moderate heat and allow the sugar to melt and slowly turn toffee coloured. This is not the time to be distracted. An occasional stir or shake is useful, but too much will prevent it from melting and cause the caramel to crystalise. Stir in the toasted nuts, leaving them to cook in the caramel for 1 minute.

Lightly oil a baking tray. You can use groundnut oil, but I prefer hazelnut oil if there is some around. Tip the praline mixture on to the tray and leave to cool. Should any of the caramel have stuck stubbornly to the pan it can be removed with a little boiling water.

To make the truffle mixture, snap the chocolate into pieces and melt in a small bowl resting on top of a pan of simmering water. Stir just once or twice, no more. The base of the bowl should not touch the water. As soon as the chocolate has melted, switch off the heat. Gently stir in 2 tablespoons of hot water and leave be.

Scrape the praline off the tray, put into a plastic bag and bash with a rolling pin. You could use a food processor if you prefer, but take care not to crush too finely. It should be the size of coarse gravel rather than fine grit. Uneven-sized lumps add to the interest.

Whip the cream till it will stand in soft folds rather than stiff peaks.

Beat the butter with a wooden spoon till soft and light then stir into the melted chocolate until the butter is melted. Fold in the cream and crushed praline.

Now is the time to add the cognac, rum or Frangelico. Spoon the mixture into the lined tin and smooth flat. Leave overnight in the fridge to set. (If you are impatient, you can probably get away with 3 or 4 hours.)

When the cake has set, slide a warm knife down the sides of the tin and unmould on to a serving dish. Serve in thin slices with fresh raspberries.

Remove the blackcurrants from their stalks, drop into a small saucepan and add the sugar and water. Bring to the boil then lower the heat and continue cooking until the fruit has started to burst and the sugar has dissolved. Remove from the heat and cool.

To make the ice cream, separate the eggs, put the yolks in the bowl of a food mixer with the sugar and whisk till thick and creamy. Stir in the vanilla extract.

Whisk the double cream until thick but not stiff. It should still be able to slide a little in the bowl. Fold the cream gently into the egg and sugar. Transfer to the lined tin.

Lightly crush the blackcurrants with a fork, then, holding back the juice, spoon the currants into the tin and gently swirl them through the mixture. Take care not to overmix. Fold clingfilm over the top and freeze for 6 hours before turning out and slicing.

Put the butter in a small pan and melt over a moderate heat, then watch it carefully until it becomes a dark, nutty gold. Take great care not to let it burn. Leave it to cool a little.

Sieve the flour and icing sugar into a large mixing bowl, then add the ground almonds. Add the lemon zest. Beat the egg whites to a soft foam - they shouldn't be able to stand up.

Make a well in the centre of the dry ingredients then pour in the egg whites, together with the melted butter.

Mix lightly but thoroughly, then pour into the buttered tins. Roughly chop the blackberries and drop into the tins. Bake for 10-15 minutes, remove from oven, then leave to settle before carefully removing from the tins with a palette knife.

A big family cake made in much the same way as carrot cake.

Line the base of two 20cm cake tins with lightly buttered or oiled baking parchment. Roughly chop the figs and walnuts. The nuts should be chopped slightly finer than the fruit.

Mix the eggs, sugars and oil using an electric mixer, and beat till pale and fluffy. Sift the flour with the baking powder, cinnamon, nutmeg and a pinch of salt. Add the yoghurt to the mixture, alternating with the flour and spices. Stir in the vanilla, the figs and walnuts.

Divide the mixture between the two lined baking tins and bake for 40-45 minutes, covering with foil for the last 10 minutes if the top is getting a little dark. Remove from the oven, leave to settle for a few minutes then run a palette knife around the edges and carefully turn on to a cooling rack. Remove the paper from each cake.

Make the icing. Beat the cream cheese, butter and vanilla till smooth, then beat in the icing sugar. Spread a layer on the base of one cake, place the other cake on top, then move to a cake stand or plate. Spread the remaining icing over the top and sides of the cake.

Sad that brandy butter is kept for one pudding eaten on one day of the year. I feel it deserves an outing with these fruit-stuffed apples, too.

For the soft brandy butter

Remove the apple cores with an apple corer or a small knife. Score each apple lightly round its tummy with a sharp knife and place in a roasting tin.

Put the sultanas in a mixing bowl. Chop the dates into pieces roughly the same size as the sultanas, then mix the two together with the maple syrup and a pinch of cinnamon. Stuff as much of the mixture as you can into the hollows in the fruit. If there is any left over, put it into the roasting tin. Bake until the apples have puffed up and started to split open, revealing a fluffy interior of baked apple - about 45 minutes to an hour, depending on variety of apple.

To make the brandy butter, put the butter into the bowl of a food mixer and beat till soft. Add the sugars and beat till you have a soft, creamy consistency, then mix in the brandy.

For those who don't want anything creamy or particularly sweet to end their meal. Perfect for Christmas.

Warm half of the wine in a small pan, turn off the heat then drop in the gelatine, leaf by leaf. Leave to soften - it shouldn't take more than 5 minutes - then pour in the remaining wine and stir till the gelatine has dissolved. If there is any froth on the surface, place a piece of kitchen paper on top of the liquid, pat down gently then remove - the froth will come with it.

Divide the pomegranate seeds between 6 medium martini glasses, filling them a good two-thirds full. Pour in the prosecco, then transfer to the fridge and leave for a good 4-5 hours.

To make the ice cream, peel the bananas, chop into chunks and drop into a blender. Pour in the yoghurt and blitz until smooth. Pour the mixture into either the bowl of an ice-cream machine and churn till frozen or into a plastic container and put it in the freezer. If you do the latter, give it a good beat every hour, bringing the frozen edges in with the more liquid centre.

To make the sauce, put the sugar into a small pan with the water and bring to the boil. Add the cranberries, then, when the syrup returns to the boil, simmer gently for 10-15 minutes. It is ready when the fruit has popped and its juices have stained the syrup a glorious ruby red. Skim away any froth with a spoon or kitchen paper (lay the paper on the top and pull away gently). Cool the sauce cool a little before serving.

Take the ice cream from the freezer a good 20 minutes before serving. Divide between four bowls (it can serve six at a push) then spoon over the sauce.