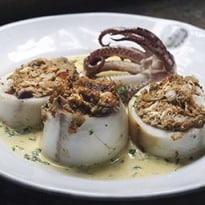 It may be the season of feasting, but nothing stands out more than a decadent seafood dish. From crab-stuffed squid to trout tartare, here's how to make waves...

On my table this Christmas will be a fresh tasting salad of raw trout, apple and radish, with a light dressing of Japanese yuzu juice and dill. Light and crisp, it will initially come out before the main course on Christmas Day but, thinking about it, would make a sensational salad too - a gentle main dish for a light lunch. I might even offer it on pieces of toasted bread, as (I hate the word) canapés. To make it more affordable, I might forgo the juice of the little Japanese fruit, and instead use a mixture of lime and clementine juice.

In complete contrast there will be an exceptionally rich fish dish around this year: a whole squid stuffed with crabmeat that I have spiced with two sorts of mustard and a little chilli sauce. I will lighten the stuffing with breadcrumbs, and serve the squid, cut into thick rings, with a little sauce made from the cracked crab shells. Undeniably rich, this will be the centre of attraction at a slightly more elaborate dinner to be served this season. There will be a salad on the side - possibly of chicory or frisée tossed with lemon and olive oil.

These two dishes, poles apart in both cost and character, will just be part of the piscine offerings this year. There will also be a fish soup for friends on Christmas Eve, tomato based, with clams and mussels.

I am bringing out the usual plates of smoked salmon and trout for Boxing Day to be passed round the table with rye bread and salt-crystal butter and I shall probably bring out a little fish pâté for the traditionalists at some point, too. Perhaps smoked mackerel, crushed with a fork, spiked with shredded cucumber, some chopped watercress, and gherkins, served with hot toast. A little fish for everyone, it would seem.

A crisp, light and fresh-tasting starter for the Christmas meal or for serving as canapés. Add crunch with radishes or the larger, milder mooli. Failing that, use a chunk of cucumber, lightly peeled to keep some of its colour.

Skin the trout fillets. Make sure that the trout has been thoroughly boned and any trace of tiny pin-bones removed. This is a really important step and one that shouldn't be missed.

Slice the fish into very fine dice, each piece about the size of a pea, then put it in a mixing bowl and chill in the fridge. Cut the apple into similar-sized dice and place in a separate bowl together with the yuzu juice.

Peel the mooli, then cut into small pieces. If you are using radishes then dice them without peeling and add to the apple. Finely chop the dill then toss it with the apple and radish.

At the last moment before serving, add the diced trout to the apple mixture, toss gently and serve.

Squid with crab and coriander

This is a long recipe, but one that is worthy of a special occasion, such as Christmas. I used dressed crabs for this, bought in their shells, which makes for a much quicker dish than if I had prepared the crab myself from scratch. You will need the shells for the cream sauce.

Peel the onions, then halve them and chop quite finely. Warm the oil in a large pan, add the onions and let them cook over a low to moderate heat for about 10 minutes until soft and pale. Remove the onions from the heat, then stir in the white and brown crabmeat, the Dijon and grain mustards and the chilli sauce. Season with salt and pepper.

Clean the squid bodies inside and out, checking that the fishmonger has removed any bits of stray skin and flesh from inside. Rinse thoroughly and dry. Spoon the crab mixture into the squid bodies, filling them almost to the brim. Secure the openings with wooden skewers.

Set the oven at 180C/gas mark 4. Lay the squid bodies in a baking dish or roasting tin. Pour a little water into the dish, cover with kitchen foil, then bake for about 30 minutes.

Crack the crab shells into large pieces with a rolling pin, put them into a saucepan then pour over the cream and bring to the boil. Reduce the heat so the cream simmers very gently for 10 minutes. Remove from the heat, cover with a lid and leave for about 20 minutes. Strain the sauce through a sieve, chop the coriander leaves, stir them into the crab cream sauce and correct the seasoning with salt and pepper.

In a shallow pan, fry the tentacles in a little hot oil until golden. Remove the squid from the pan, cut into thick slices and divide between warm plates. Add the tentacles, spoon over the sauce and serve.

Photo: Taste of the sea: Nigel Slater's squid with crab and coriander. Photograph: Jonathan Lovekin for the Observer