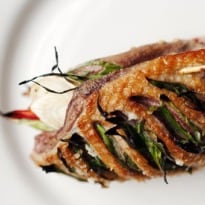 Flatten a piece of meat with a rolling pin, and supper will be ready in 15 minutes, says Nigel Slater. Gammon with broad beans, chicken with taleggio and pork fillet with apple - perfect for a warm summer's night.

Thin slices or escalopes of meat and fish can be grilled in seconds, fried in minutes, or rolled, stuffed and baked. You can flatten a pork steak with a rolling pin, pop it on the griddle, then serve it with a quick chutney made by simmering onions, fresh apricots and spices. Or slice then bat out a chicken breast, flour, egg and breadcrumb it, then fry till crisp. Good with a mixture of yoghurt, shredded cucumber and fennel fronds. Other candidates are minute steaks, pork escalopes, lamb steaks and gammon.

Smoked fish and ham often come in suitably thin slices already. I sometimes wrap up shavings of cucumber or carrot and chopped dill with ham or smoked salmon. Air-dried ham, sliced thicker than normal, lends itself to wrapping up buffalo mozzarella or being crisped under the grill and crumbled over a salad.

Even when pork or gammon, lamb or a boned chicken leg comes as a thin steak, I still give it a good bash with a cutlet bat (the rolling pin will do), stretching it even thinner.

It's a versatile, quick cut for the quick cook.

Much better than the grilled pineapple route.

Boil the beans in lightly salted water, for 8-10 minutes till tender, then drain. Pop the beans from their skins, then return them to the pan. Using a fork, crush the beans to a rough paste.

Melt the butter in a shallow, non-stick pan, let it sizzle, then add the gammon steaks. Cook the gammon for 3 or 4 minutes each side, spooning over the butter as you go. Remove the meat to a warm plate then add the mustard seeds to the butter, let them cook briefly - they may start to pop - then add the crushed broad beans and a grinding of black pepper. When all is sizzling, briefly return the gammon to the pan then serve with the broad beans.

A light, crisp, fresh little lunch here. Smoked salmon will work too, as would smoked eel if you can find it cut thinly enough.

Lightly peel the cucumber, then, using the vegetable peeler, slice into long, flat ribbons. Spoon half of the white wine vinegar over the cucumber. Peel and stone an avocado and slice the flesh into strips about as thick as a pound coin. Drop gently into the cucumber, then add a couple of handfuls of radish sprouts or sprouted seeds and toss gently.

Put the remaining vinegar in a small bowl, add salt and pepper, then whisk in the olive oil. Grate a tablespoon of horseradish into the dressing then spoon over the cucumber.

Shred the smoked trout into long, finger-width strips then add to the cucumber, turn gently with your fingers then divide between two plates.

Pork fillet with apple and honey

I would usually roast a tenderloin, but if you slice it into rounds the thickness of pound coins it will cook even quicker.

In a large bowl, mix the honey and mustard with the cider vinegar and a grinding of black pepper. Set the oven at 200C/gas mark 6.

Thinly slice the pork tenderloin. Finely slice the apple into rounds, coring it first if you wish. Place the rounds of pork and apple in the dressing and toss gently to cover. Tip them on to a lightly oiled baking sheet or dish, making sure they are in one layer. (You could arrange them alternately if you wish.) Season with a little salt. Bake for 15 minutes till golden and sticky. Finely grate a little lime zest over before serving.

Slicing a duck breast horizontally gives you two thin pieces to grill or fry, but also a neat cut for stuffing.

Slice each of the duck breasts horizontally across the centre, not quite cutting all the way through, so you can open each out like a book.

Slice the spring onions into fine rounds, then halve, seed and thinly slice the red chillies. Mix with the grated ginger and a little salt. Stuff most of the onion, chilli and ginger inside the duck breast then fold over to close and push a skewer through the edges to seal.

Place the breasts in a small baking dish, make four or five slashes across the skin and down to the stuffing of each breast, then fill the slashes with more stuffing. Roast at 220C/gas mark 7 for 5 minutes then lower the heat to 200C/gas 6 and cook for 15-20 minutes. Serve with tenderstem broccoli.

Use a boned, skin-on chicken breast, slicing it in half horizontally, and patting it out a little more thinly.

Set the oven at 180C/gas mark 4. Slice the chicken breasts in half horizontally. Place the slices snugly on a lightly oiled baking sheet and season with salt and black pepper. Slice the cheese thickly and divide between the four pieces of chicken. Wrap a slice of parma ham around each piece of chicken and tuck a couple of sage leaves into each.

Bake for 10-15 minutes till the cheese has started to flow. Lift carefully from the baking sheet with a fish slice.