No Baking Necessary for These Fridge Cake Recipes 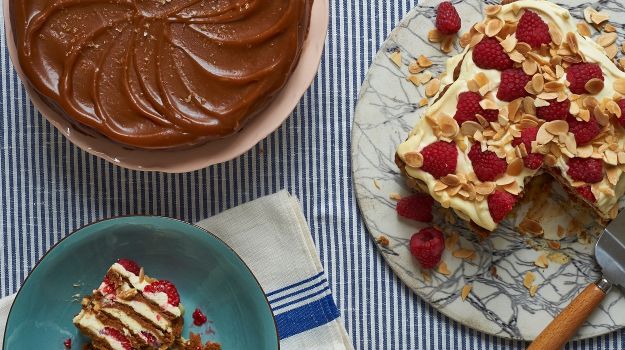 No-bake desserts are a winner, whatever the weather. These creamy refrigerator cakes – one with burnt honey swirled through biscuits and cream, another swathed in salted caramel – will help keep kitchen temperatures down

In the chaos of a recent house move, I've found myself without a working oven. I've been pacing from stovetop to cupboard and back again, impatient to get cooking, trying to find a way to sate my baking appetite while I wait for the phantom engineer. So, this week, in defiance of this column's whole raison d'"tre, here are two recipes that needn't involve any baking at all. The first, an American style "icebox cake", the second a chilled chocolate torte. I've given instructions for how to bake the biscuits for the icebox cake for those who have working appliances, but you can buy them in any supermarket, too.

In its purest form, this dessert is just sweetened whipped cream, stacked with biscuits " as sickly-perfect as it sounds. I've added in a few raspberries for relief, though, their bright tartness cutting through that heaviness and those shades of beige.

The "burnt honey" element is a misnomer, I suppose: it's just honey that's been simmered for a couple of minutes, until it's a rich amber colour. This works just the same way as caramelising sugar, shifting the flavour from syrupy sweetness to a far purer, more rounded honey taste.

1 Pour the honey into a small pan and set over a high heat. Bring to a simmer and let it bubble for a minute or two, until the honey smells rich and nutty, and has darkened a couple of shades. Remove from the heat, immediately pour in 75ml of the double cream and whisk to combine. Decant the mixture into a clean bowl, add the vanilla bean paste and salt, then leave to cool to room temperature.

2 Once the honey mixture has cooled, whisk the remaining double cream until it forms soft peaks. Fold the honeyed cream into the whipped cream, then continue to whisk the mixture until very thick and glossy. The cream ought to hold stiff peaks.

3 Spread 1 tbsp cream on your serving plate/board " this will help the bottom layer of biscuits to stick " and arrange a quarter of the biscuits in a square or rectangle formation on top. Dollop with a quarter of the cream and scatter some raspberries over. Arrange the next layer of biscuits on top, and repeat these layers until you've used all of the ingredients. Scatter the flaked almonds on to the uppermost layer of cream, along with the raspberries.

4 Place in the fridge and leave to sit for at least 8 hours, though longer is always better.

Using alkaline bicarbonate of soda in these lightly spiced biscuits encourages a chemical reaction that helps them to brown evenly, despite their relatively short cooking time.

1 Combine the flour, icing sugar, soft dark brown sugar, cinnamon, bicarbonate of soda and salt in a large bowl. Add the butter and rub it into the flour mixture using your fingertips, until no visible chunks of butter remain and the pastry is sandy and fine. Add the water and "cut it in" using a small knife " or pulse in a food processor " until the flour has moistened and begins to come together in clumps. Press the dough together into a disc, wrap in clingfilm and refrigerate for at least 30 minutes, or until less sticky, firmer and easier to roll. Meanwhile, heat the oven to 180C/350F/gas mark 4 and line two baking trays with parchment.

2 Roll the dough to roughly 25 x 25cm on a lightly floured work surface, working quickly, lightly and with minimal handling to avoid sticking. Cut into rectangles roughly the size of a bourbon biscuit and arrange these on the prepared baking trays.

3 Bake for 15 minutes, then leave to cool completely before removing from their trays.

"Cook's tip The burnt honey and sugar syrup in these recipes will harden as soon as they begin to cool. To avert a washing-up nightmare, add the cream and butter (if applicable) straight away.

1 Heat the sugar for the caramel in a small, heavy-based pan with 2 tbsp water. Set over a medium heat, stirring occasionally until the sugar is dissolved, then turn the heat up and leave to bubble, completely untouched, until the syrup darkens to a rich amber caramel. Immediately whisk in the butter, cream and salt, then leave to cool.

2 Melt the chocolate with 100ml of the double cream in a heatproof bowl set over a pan of simmering water. Once smooth, stir in the butter and a third of the cooled caramel mixture. Leave to cool to room temperature.

3 Whisk the remaining 400ml double cream with the caster sugar until the mixture holds stiff peaks, taking care not to overwhip. Fold the cream gently into the cooled chocolate.

4 Line a 20cm round springform cake tin with clingfilm, then spoon in the chocolate mixture. Leave it to chill in the fridge for at least 3-4 hours. You could also place it in the freezer for 10-15 minutes to firm up if you have any trouble cooling it. Once thoroughly chilled, unmould the dessert and spread some of the remaining caramel over the top in an even layer. Serve straight away.