Okra's Triumph of Taste Over Texture 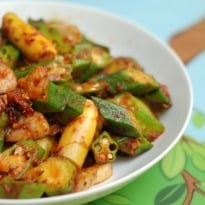 Okra has been like the awkward girl no one but her family thought had any talent. But just look at okra now. Riding a wave of globalism and Southern culture's star turn, okra has found new audiences beyond those who appreciate its slime as thickener for gumbo.

And we're not just talking about pickled okra in a Bloody Mary. "I like to think of it as the next asparagus," the Southern cook Virginia Willis writes in her slim volume on okra for the "Savor the South" series.

Indeed, okra has always had a fan base in California and the South, but it is becoming more popular at farmers' markets from Colorado to Massachusetts among people familiar with the culinary canons of India and the Caribbean, as well as with adventurous new cooks. But it does have a reputation for slime.

"It's still hard for it to overcome the texture issue some people have," said Laura McDonald, who works for the New York Greenmarket. "But for people who shop at the market and really know okra, it's selling really well." So about the slime factor. It's actually a source of soluble fiber, and it comes on strongest when okra hits water.

Learning to use okra's slime to an advantage in stews and other one-pot meals was a skill West Africans developed and brought with them when they were enslaved. The food scholar Jessica Harris calls it "the one vegetable absolutely emblematic of the African presence in the New World."

I have taken to roasting halved okra with sweet onions in a hot oven as a side dish. Dry it well and cut it right before you roast, and the slime is minimized. Other cooks suggest tossing okra with a touch of acid like vinegar or lemon, which also helps reduce slime. So does tomato, which is partly why okra is terrific stewed with tomatoes, or made into gravy for rice or biscuits.

Jennifer Hill Booker, a Mississippian with French culinary training who in September will publish her first book, "Field Peas to Foie Gras," recalls her grandfather's eating okra, onion and tomato gravy over biscuits. The dish made a lot of sense because the vegetables matured in the garden at about the same time.

"I thought it was the grossest thing ever," she said. Now, she and her two young children eat a lighter version over rice. She also stir-fries okra in sesame oil with garlic, carrots, onion and maybe some celery, then adds soy sauce and serves the dish over noodles.

Buying small, firm pods is best for most applications, and it doesn't matter much if they are green or burnished purple. Softer, bigger pods have their fans, particularly among older Southerners, who chop up okra to encourage slime. Then, it gets tossed with cornmeal and fried in cast iron into a kind of hash.

You may find heirloom varieties beyond the Clemson spineless that dominate the produce bins. Look for the stubby Star of David from the Middle East or the Annie Oakley II, a hybrid that grows well in cooler Northern climates.

And keep an eye out for okra on a growing number of restaurant menus. A chef at Maialino in New York put young okra on a pizza at the urging of Zaid Kurdieh of Norwich Meadows Farm, in Norwich, New York, which sells at the Greenmarket.

Kurdieh also sees it being picked up by Southern chefs making their mark in New York. "We're selling more and more every year," he said. "But do we sell okra like we sell tomatoes? Of course not."

Promoted
Listen to the latest songs, only on JioSaavn.com
1 pound okra pods, washed, capped and cut in half lengthwise
1 small Vidalia (or other sweet) onion, ends trimmed and sliced into crescents
Kosher salt and freshly ground pepper
2 tablespoons olive oil
Chopped fresh basil and mint
Heat oven to 400 degrees. Combine okra and onion in a bowl. Season with salt and pepper, drizzle with olive oil and toss well to coat. Roast until vegetables are just tender, 10 to 12 minutes. Toss with herbs and serve.