The early winds of winter have taken over the country and seasonal staples are slowly, but surely, making inroads into our kitchens. One of these is the winter favourite Panjiri. 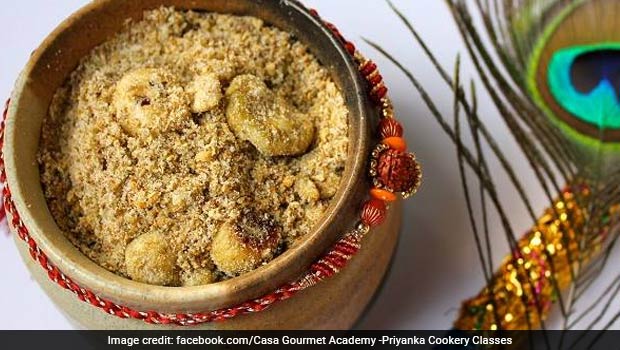 The early winds of winter have taken over the Northern belt of the country and seasonal staples are slowly, but surely, making inroads into our kitchens. If you happen to reside in the Northern part of the country, or have friends who live here, you would be aware of the perennial love-hate relationship we share with winters. When the temperatures dip to a point that you can't even feel your hands, when none of the woolen clothes are able to save you from the nasty cough, cold and sore throat, you look towards traditional home remedies for help. Thanks to the age-old wisdom we have imbibed from our parents and grandparents over generations, there are several effective ways that can help us put up a brave fight. Most of these nuskhas suggested by elders, are based on their nuanced knowledge of kitchen ingredients, that they would put together to whip up several combinations. One such protective food that Punjab and Harayana proudly boasts of is the Panjiri.

Panjiri is a dry and sweet snack prepared during winters. The nutritional supplement is made from whole-wheat flour, fried in sugar and ghee and packed with dried fruits, nuts and at times edible gum or gond. Often made in huge quantities right at the start of the winter, Panjiri is often stored in air tight containers and is eaten in wintry mornings and evenings to ward off cold and bolster immunity. Panjiri induces heat in the body and aids in aches and pains that are typically caused during winters.

Panjiris and Gond Ke laddoo, have been used as 'Hot Foods', in the ancient Ayurvedic wisdom. The latter is specifically offered to nursing mothers to increase their production of breast milk. Meher Rajput, Nutritionist at FITPASS says, "Gondh has many Nutritional and Ayurvedic benefits. It is tasteless and odourless and turns to gel like substance, if soaked in water. It can be mixed with other herbs like methi dana, saunf, black pepper, till seeds and ajwain'.

These laddoos help in lubricating the joints and reduces back pain along with other joints pain. It can be served to lactating mothers for the nourishment of their body. It's rich in fat & fibre and can be given to lactating mothers in order to build their immunity and strengthen them from within.

The recipe of PanjirI differs from family to family, but it typically contains a mixture of whole wheat or sooji, ghee, gondh (edible gum), almonds, cashew, walnuts, saunf, lotus seeds, cardamom and magaz. If you happen to be a diabetic, it is better to keep the sugar content to a minimum, and replace the sugar with a few dates or any natural sweetener. Make sure you drink enough water with panjiri as in rare cases there are chances of constipation and cramped intestine. The nuts and fibre content of panjiri makes it a wholesome food for winters.

Here's a recipe of Panjiri by Chef Niru Gupta you can try this winter.