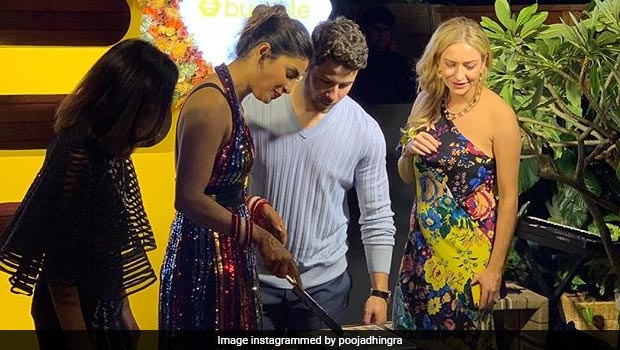 Bollywood actor Priyanka Chopra recently got married to American pop singer Nick Jonas, in a fairytale wedding at Jodhpur's Umaid Bhawan Palace. The couple has been one of the biggest talking points in national and international news over the past week. Priyanka Chopra and Nick Jonas got hitched twice, as per Christian and Hindu wedding rituals on December 1st and December 2nd, 2018, and Priyanka is already back to work. The diva, who won the Miss World title in 2000, has been wowing the world with her dreamy wedding pictures from both the ceremonies. While she wore a gorgeous and regal Ralph Lauren gown with a stunning 75 feet long tulle veil for the Christian ceremony, she was seen in a bright red Sabyasachi wedding ensemble for Hindu ritual wedding. Now Priyanka Chopra has added another shining feather to her cap by becoming the first Indian woman to grace the cover Vogue USA.

Priyanka Chopra had shared the cover on her Instagram account last week, but she celebrated the feat yesterday at a Mumbai event of the dating site Bumble, which is launching in India. Priyanka Chopra Jonas, who launched the dating app in India this week, was present with her husband Nick Jonas and after the event, the newly-weds participated in a cake cutting ceremony. The cake was stunning chocolate cake, with a print of Priyanka's 2019 Vogue USA cover photo on top of it. Priyanka Chopra cut the cake and even fed it to Nick Jonas.

Have a look at Priyanka Chopra's celebratory chocolate cake with her Vogue USA cover on top:

Priyanka Chopra and Nick Jonas at an event in Mumbai

The cake was created by dessert brand Le15 owned by pastry chef Pooja Dhingra, who also posted a number of pictures and videos from the event. In her Instagram post, Dhingra said, "Congratulations on being the first Indian woman on the cover of @voguemagazine! So thrilled @le15india could make the cake for the celebration." After a quick hop in Mumbai for the Bumble event, Priyanka Chopra and Nick Jonas are now headed Udaipur as festivities of Mukesh Ambani's daughter Isha Ambani's wedding to Anand Piramal are kick-started.