Priyanka Chopra posted a picture of her enjoying Delhi's famous Daulat Ki Chaat at the Indian Accent, Lodhi on Wednesday. Cash in my dessert, she captioned the image. 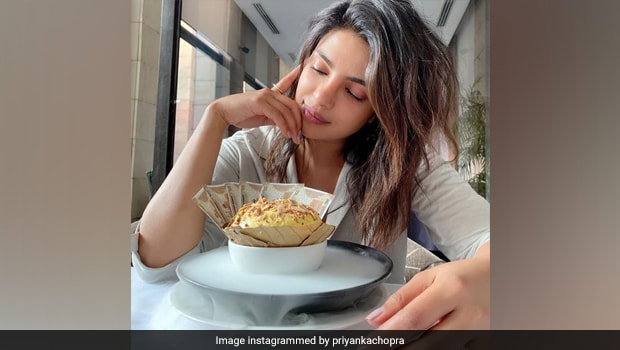 After delivering a spectacular performance in 'The Sky Is Pink', Priyanka Chopra would be seen sharing screen space with Rajkummar Rao in the web adaptation of Aravind Adiga's Man Booker Prize-winning novel 'The White Tiger'. The actress has flown down to Delhi to shoot for the same and looks like she is making the most of her time, here in the capital. On Wednesday, Priyanka Chopra posted a picture of her enjoying Delhi's famous Daulat Ki Chaat at the Indian Accent, Lodhi. The creamy dessert, loaded with chunky nuts, is truly one-of-a-kind and is served with 500 rupee notes at the award-winning Delhi restaurant.

(Also Read: The Magic and Mystery in the Making of Daulat ki Chaat)

Daulat ki chaat is an Old Delhi speciality; it goes by the names of Nimish in Lucknow and Malaiyyo in Banaras. The unique dessert is typically found in winter months. It is made by churning milk rigorously overnight. The creamy foam that collects on top is scooped out, mixed with sugar and served with a topping of cardamom, pistachios, and almond flakes.

Delhi is a treasure trove of unique delicacies. 'Daulat' in Hindi refers to 'wealth'. According to legends, it was a delicacy that could be afforded only by the rich; hence, it became popular as daulat ki chaat. In some restaurants, like The Indian Accent, you can find daulat ki chaat all-year-round. The melt-in-your-mouth dessert is surely nothing like anything you have had before.