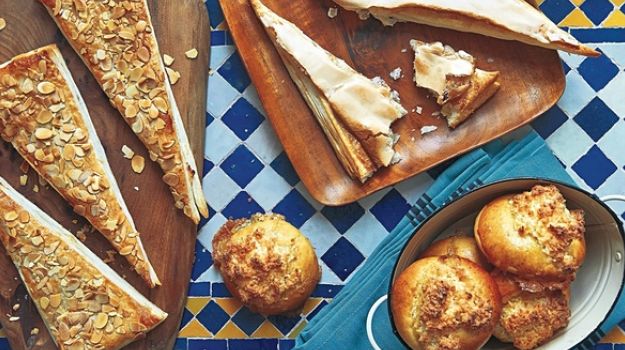 The Portuguese make a religion of their pastries, celebrating saints’ days with little cakes of all kinds, filled with custard or scattered with flaked nuts, such as these two heavenly confections: the Jesuit pastry and the bread of God. Amen

Treacly honey cake topped with walnuts; a tart full of shredded, syrup-drenched squash; an orange-scented cloud cake; glazed palmiers; old-fashioned rice cakes, smart in their iconic white-and-blue paper cases " these are just a few of the things I ate in Lisbon on a short trip last month. There's a strong history of patisserie in Portugal dating back to the middle ages, where nuns would supplement convent incomes by baking, quite literally, religiously. You can see that history sprawled across the counters of every neighbourhood coffee shop in shades of cake, biscuit, bread and bun.

The history of Portuguese pastry sprawls across the counters of coffee shops in shades of cake, biscuit, bread and bun

The bakeries behind these pastries are just as varied. Most striking are the luxuriant displays of the specialist patisseries, fabrico pr"prio (roughly "made on site") proudly emblazoned across the store fronts. Then there are the thousands of tiny cafes where you can match a black coffee with an almond tart, or one-hit bakeries whose cakes are more famous than the premises they occupy, and even vendors who trek the beaches with coolboxes full of sugared custard doughnuts, or bolas de Berlim.

Past"éis de nata are the most famous Portuguese treats, but I'm not sure that you can ever really match the quality of professionally made pastries in a home oven. Make the pilgrimage to Bel"ém if you want an authentic custard tart, but in the meantime, try these easy bakes: filled pastry slices and sweet coconut bread.

These understated pastry slices might not impress at first glance, but they are a very special import: buttery puff pastry layered with sweet cream and a crisp icing. The egg-yolk filling, doce de ovos, is a staple of Portuguese baking, whether used for glazing cakes or cooked to a thick custard to be piped into doughnuts. Typically, jesu"tas come topped with a baked royal icing that sets to a crisp, meringue-like consistency after baking. Some varieties are topped with almonds, and it's a welcome alternative if you're nervous of the icing's heavy sweetness. I've given both topping recipes here.

1 Preheat the oven to 200C/400F/gas mark 6. Whisk together all the filling ingredients in a small, heavy-based pan and set over a low heat. Stir constantly for 5 minutes or so until the mixture has thickened enough to hold its shape without flowing around the base of the pan. Remove from the heat, decant into a clean bowl, cover with clingfilm and leave to cool.

2 If you are topping the pastries with icing, slowly whisk the egg white into the icing sugar until very thick and smooth. If you're using the almond topping, beat the egg and caster sugar lightly together.

3 To make the jesu"tas, cut the pastry block in half and roll out each piece on a lightly floured surface to a rectangle roughly 20x35cm. Leave them to rest a moment, then gently lift them from the surface and set them down again, giving the dough a chance to relax. Roll out a little more if the dough shrinks back. This stops the dough shrinking and distorting after you've cut it into portions.

4 Cut out six triangles, each 10cm wide at their base and 20cm high, from both pieces of pastry. (Imagine the triangles lined up along the length of the pastry rectangle, three with their bases forming one long edge, the other three upside-down slotted between, their bases forming the opposite long edge.) You may be able to reroll any scraps to make another couple of triangles.

5 Spread half of the triangles with heaped tablespoons of the egg yolk filling, then lay the remaining triangles on top. For iced pastries, spread a heaped teaspoon of the icing over the pastry, leaving a border of at least 0.5cm around the edges. (You won't need all of the icing). For almond-topped jesu"tas, brush the whole of the top with the egg wash and sprinkle over the flaked almonds.

6 Bake on a lightly greased baking tray in the preheated oven for 25 minutes. The pastry should be puffed, crisp and golden, and any icing hardened to a brittle meringue.

Related: Four desserts from one batch of creme patissiere | Get Ahead

With a name that translates as God's bread, these buns (traditionally served on All Souls' Day) promise a lot and deliver just as much: heavenly light, dough topped with sweet coconut.

1 Stir the yeast into the lukewarm milk and leave for a couple of minutes. Stir the flour, salt and sugar together in a large bowl, then add the milk and yeast mixture and the softened butter. Mix together thoroughly then knead for 10 minutes, until smooth and elastic. Leave to rise in a bowl covered with clingfilm. It's ready after 90 minutes or so, once it has doubled in size.

2 Once risen, divide the dough into 12 equal pieces and roll into balls. Pinch the dough underneath to give a smooth top surface. Set the buns on a lightly greased baking tray and cover with clingfilm. Leave to rise for an hour, or until twice their original size, by which time they should feel spongy and soft.

3 While the buns rise, combine the ingredients for the coconut topping and whisk the egg and sugar together for the glaze. Preheat the oven to 180C/350F/gas mark 4.

4 Brush the buns with egg glaze, add a heaped tablespoon of the coconut mixture of each, and bake for 25 minutes in the middle of the oven, until the dough is tan and well-risen and the topping is golden " check after 15 minutes and if the tops are darkening, cover loosely with foil . Leave to cool completely before eating.