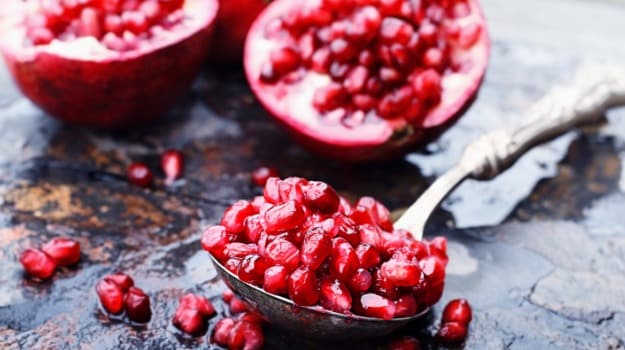 A tequila sunset, using homemade grenadine is sweet, but balanced with the acidity of the grapefruit. It packs a punch when combined with tequila

The pomegranate has been cultivated since ancient times.

Originally from Iran, Northern India and the Himalayas, the pomegranate was common through the Mediterranean, and brought to the Americas with Spanish colonisation in the 1700s.

Pomegranate is in season throughout autumn, and here on the streets of Melbourne's inner north, pomegranates are ripening, hanging over the low fences of suburban front yards. Their skins are yellow then blush a deep red.

In the coming weeks, if they're left on the tree, the skin will begin to crack and burst, revealing their ruby jeweled insides. The base of the fruit is crowned with a pretty calyx. Their skin is leathery, their bursting seeds are protected by a thick spongy membrane.

Extracting the seeds from the membrane can be difficult. A good method is to slice through the exterior skin, then break the pomegranate into two halves. Once you have two halves, hold the pomegranate half seed side down, over a large bowl, and using a wooden spoon whack the skin side of the pomegranate half. With a little coaxing, and whacking, the seeds should fall out. You want them to remain intact, rather than burst into the bowl, but you will be sure to burst a few. Wear an apron for this, as it can get messy and the juice can stain.

The seeds freeze well, and it's great to have them on hand to sprinkle through a salad, or on top of a babaganoush. At the market choose a pomegranate that is heavy for its size, they'll be the juiciest, which is what you want, especially for the grenadine recipe below.

Homemade grenadine is sweet, tart, floral, a little like pomegranate molasses without the muskiness. Store-bought grenadine often doesn't have anything even resembling pomegranate juice in it, it's simply sugar and red food dyes. It is well worth making grenadine at home, and now, while the pomegranates are cheap and plentiful is the best time.

A tequila sunset, using this homemade grenadine is very fancy. It is sweet, but balanced with the acidity of the grapefruit, and there is of course the punch of the tequila. It's a drink that evokes the colour of a desert, lit up in the fire of late afternoon light. It uses the best autumn has to offer, with the beginnings of the wintery citrus season. The grapefruits for this recipe we picked from a friend's tree. They live in the hills near Melbourne and it's cooled off there, the citrus already ripening.

Press the pomegranate seeds in a moulie or ricer over a bowl to juice them, a little at a time. Once you have juiced the seeds (you should have approximately 550ml of juice) strain the juice through a fine sieve.

Place the pomegranate juice, lemon juice and sugar in a heavy based saucepan over a moderate heat. Stir until the sugar has dissolved, then simmer for 10 minutes until the syrup has reduced by half. Set aside to cool and then place in a sterilised jar, this will store in the fridge for one month.

For the tequila sunset:

In a jug or vessel, place 30ml tequila, half the orange juice, and ice. Stir gently until the juice is chilled. Strain out the ice, draining the juice into your serving tumbler.

Repeat for the second cocktail.

Be careful when you are opening pomegranates. Photograph: Lauren Bamford for the Guardian