Sesame Recipes That Are Streets Ahead | Ruby Tandoh 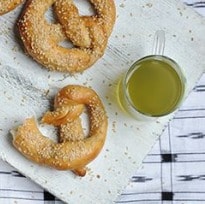 These simple seeds are more than big bird food. You can count on them to make perfect pretzels and sophisticated biscuits that no cookie monster could resist.

Everybody should expand their baking repertoire with sesame seeds. This evangelical zest for sesame might seem misjudged considering it's usually relegated to the role of useless garnish - a few anaemic seeds scattered on top of a shop-bought bloomer - but take the time to experiment with it and you'll reap the rewards. The tiny seeds have a toasted, nutty flavour and satisfying crunch, which can add interest to even the plainest breads and biscuits - in this case, sesame-encrusted pretzels, and black sesame "Oreos".

The trick to chewy pretzels with a rich brown colour is to boil them before baking: the heat forms a skin on the outside, while the addition of bicarbonate of soda to the water helps to encourage them to brown in the oven. I won't go into the chemistry of it all here, but for anyone as interested as I am in the science behind baking, a quick search on the Maillard reaction will fill in the gaps.

I use malt extract in these for both flavour and colour, but if you can't find it (usually available in health food shops) just substitute 2 tsp soft brown sugar.

1 Mix the flour, yeast and salt in a large bowl. Whisk the malt extract with the milk and water, then add this to the flour mix along with the butter. Work the ingredients into a smooth dough, then knead for 5-10 minutes, until it begins to feel silkier and more elastic. Leave to rise in a covered bowl, at room temperature, for around an hour, or until doubled in size. It's important that you don't rush this stage - it may take up to two hours to double, depending on the temperature of your kitchen and of the ingredients.

2 To shape the pretzels: tip the risen dough out of its bowl and divide into 12 pieces. Stretch and roll each piece into a long sausage 40cm long, slightly thicker in the middle than at each end.

3 Twist the ends of the piece of dough round to form a loop of dough, with the ends crossing. There should be 5-7cm of dough free at each end. Twist the ends over each other again to make a loop of dough with a double twist leading into two short tails. Now fold the twist and tails upwards into the centre of the loop, and tuck each of the tails underneath, at roughly 10- and 2-o'clock positions. This sounds fiddly, but it's very simple once you get used to it: look at the photos to help you visualise the process. Repeat with the remaining pieces of dough.

4 Leave the shaped pretzels to rise at room temperature, on a lightly floured piece of baking parchment, for 20-30 minutes until puffy. Meanwhile, bring a large pan of water to the boil and heat the oven to 210C/425F/gas mark 7. Line two baking trays with parchment.

5 Once the pretzels have risen, add the bicarbonate of soda to the boiling water and boil the pretzels - in batches - for 10 seconds on each side. Use a slotted spoon to carefully remove from the water, without squeezing or knocking the dough, and place on the prepared trays. Brush the boiled pretzels with egg wash and sprinkle liberally with sesame seeds. Bake in the preheated oven for 15 minutes, or until golden brown and firm to the touch.

1 Grind the sesame seeds in a food processor or coffee grinder until they're reduced to a mealy powder, then set aside. Mix the flour and cocoa powder in a large bowl, then rub the butter in, using your fingertips, until the mixture resembles fine breadcrumbs. Toss in the ground sesame seeds, sugar, baking powder and salt. Add the water and use a small knife to cut the liquid into the mixture until all of the flour has moistened. Lightly press the mixture into a flat disc, adding a drop more water if necessary, then wrap tightly in clingfilm and refrigerate for 15‑30 minutes. Heat the oven to 180C/350F/gas mark 4 and line a large baking tray with parchment.

2 Roll out the dough on a floured work surface to around 20x35cm, and 3-5mm thick. Use a 4-5cm round pastry cutter to stamp out circles. Arrange them on the prepared tray (line a second tray if necessary). Reroll the offcuts and stamp out more biscuits, if you want.

3 Bake for 12 minutes in the preheated oven, then leave to cool before carefully peeling away from the baking parchment.

4 For the buttercream, beat the butter with the green tea powder until smooth (and bright green), then gradually stir in the icing sugar. Add a splash of milk if the mixture is too stiff. Place a teaspoonful of the buttercream on each of half of the batch of biscuits, then sandwich with the remaining biscuits, pressing gently down to help squash the buttercream and bring it flush with the edges of the biscuit.

Photograph: The pretzels are flavoured with malt extract, while the green tea cookies get their colour from black sesame seeds by Jill Mead for the Guardian