Shilpa Shetty was in Goa this Sunday and obviously she had her famously indulgent binge session on-the-go, but it didn't quite turn out the way she would have liked. 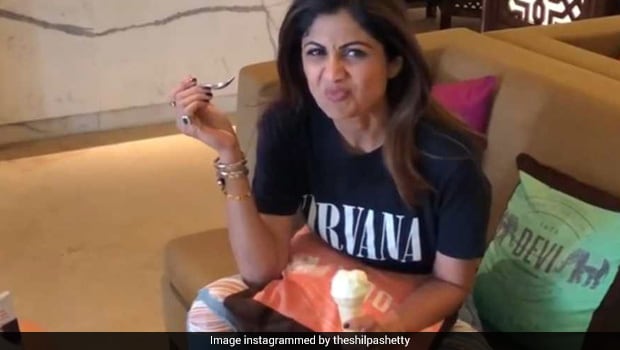 Highlights
Shilpa Shetty was in Goa this Sunday and obviously she had her famously indulgent binge session on-the-go, but it didn't quite turn out the way she would have liked. The Bollywood diva recently made news when she was honored at Style Awards organized by a prominent English daily, so obviously celebrations were in order. Moreover, Shilpa has just launched a game of her own called the 'Domestic Diva Game' which is a cooking game where one can cook all kinds of dishes.

Last Sunday, Shilpa shared a video of her playing the game, while bingeing on some delicious-looking homemade avocado, kiwi and pineapple ice lolly. Have a look!

However, Shilpa Shetty's Sunday binge in Goa didn't quite go as planned and sadly, it turned into what she called 'Sunday cringe'! It all started with Shilpa being a little adventurous and trying out a gulab jamun cheesecake, which is now a popular fusion dessert made by bringing together the Indian sweet and the French pastry. As appetizing as the dessert sounds, not everyone can enjoy it. For Shilpa, the two sweets didn't quite do the trick.

"#Sundaybinge in Goa..Wanted #bebincacake (a local delicacy) but settled for gulab jamun cheesecake (which was a horrid combo) More like Sunday cringe Thank God for the #pistachioicecream", Shilpa wrote on Instagram. Well to be quite honest, we're a bit disappointed that Shilpa didn't quite enjoy the cheesecake that has started making its presence felt in a lot of restaurants across the subcontinent.

The dessert is made by putting a layer of sugary sweet gulab jamuns over the biscuit base and then filling up the rest of the pan with cheesy goodness. The cake is then baked and later refrigerated and served cold.

Looks delicious, doesn't it? Some people like fusion dishes as much as they enjoy the traditional ones, but some people are puritanical in their taste. Guess Shilpa falls in the second category!