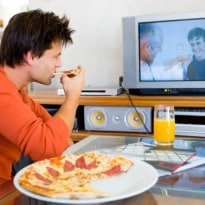 We've been warned about a number of factors that trigger cancer -smoking, processed meat, high fat diets etc. But, this new study reveals something  new.

According to a latest research, people who spend most of their day sitting - whether it's in front of a computer or TV, or behind the wheel - appear to have an increased risk of developing certain kinds of cancer.

A meta-analysis of 43 observational studies found that there was a correlation between a sedentary lifestyle, which means prolonged periods of sitting and a higher risk of colon, endometrial, and lung cancer.

The study published in the Journal of the National Cancer Institute (JNCI) looked at 43 different studies including over 4 million individuals and 68,936 cancer cases. It assessed the relationship between TV viewing time, recreational sitting time, occupational sitting time, and total sitting time with the risk of various cancers. The data used in individual studies was obtained from self-administered questionnaires and interviews.

Researchers, Daniela Schmid and Michael F Leitzmann, of the Department of Epidemiology and Preventive Medicine, University of Regensburg, Germany, observed that when the highest levels of sedentary behaviour was compared to the lowest, there was a significantly higher risk for cancer.They observed that people who spent the most time sitting during the day had a 24 percent increased risk of getting colon cancer compared to those who logged the least number of hours in a chair. When they looked just at time spent watching TV, the risk jumped even more. TV viewing time showed the strongest relationship with colon and endometrial cancer. Those who logged maximum hours glued to their TV screens showed a 54 percent increased risk of developing colon cancer compared to those who watched it the least. According to Daniel, this may be because people tend to consume more junk food and sweetened drinks while watching TV.

Dr. Graham Colditz, Associate Director at Washington University's Siteman Cancer Center in St. Louis, wrote an editorial accompanying the study highlighting the fact that sedentary lifestyle along with weight gain and obesity exacerbate the risk of cancer. He said "Since the study looks at establishing a broad relationship it can't say that sitting by itself can cause cancer. However, the findings seem to be consistent with many other studies and thus should be taken seriously."

The researchers concluded by saying that "A sedentary lifestyle can increase the risk of cancer even among physically active people which is why limiting the time spent sitting may play an important role in preventing cancer."