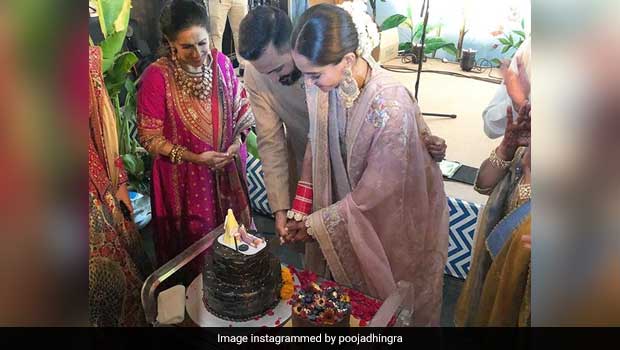 Highlights
Bollywood actor Sonam Kapoor got married yesterday to her boyfriend entrepreneur Anand Ahuja, in what is quickly becoming one of the most talked-about weddings of the year. The diva, who will, henceforth, be addressed as Sonam Kapoor Ahuja looked stunning in her beautiful red wedding ensemble. She tied the knot with Ahuja in a Sikh wedding ceremony at her aunt Kavita Kapoor's residence in Mumbai on Tuesday. Scores of top Bollywood actors were in attendance at the wedding and everyone wished the good-looking and happy couple a cherished married life. Social media has been abuzz with excitement and news, as pictures from the dreamy wedding ceremony are still pouring out on the interweb. Meanwhile, we can't stop gushing about the wedding cake that the couple cut together, after the wedding ceremony got over.

Sonam's close friend and pastry chef Pooja Dhingra, who is known as the macaroon queen of India and owns a chain of bakeries and cafes in Mumbai, posted a lovely picture of Sonam Kapoor and Anand Ahuja cutting a very pretty cake as man and wife. Have a look!

Also Read: Sonam Kapoor is A Big Foodie and We Have Proof

Aren't the cakes simply gorgeous? It was Pooja's Le 15 Patisserie that crafted the oh-so-adorable and delicious-looking cakes. Don't miss the cute bride and bridegroom figurines on top of that multi-tiered wedding cake! Here's a closeup:

Oh the stunning detail of this one! If you know Sonam Kapoor and Anand Ahuja's love story, you may understand the meaning of the figurine, which was customised to capture the cute couple's chemistry. The bride can be seen dragging the groom away from a basketball court. We find Pooja's rendition of the couple's relationship especially adorable, don't you? Pooja Dhingra also left a very sweet message for the newelyweds saying, "And then you realise that only love is real and it melts your cynical heart, for a match like this, had to have been made in heaven. congratulations @sonamkapoor @anandahuja, I heart you guys!"

Also Read: Sonam Kapoor Showed Some Love To This Vegetarian Recipe And It Looks Delicious!

To put a desi touch to the cakes, in keeping with the very desi wedding ceremony, the cake has been decorated with marigold flowers. The second cake looks just as stunning to us, with its beautiful decoration of edible flowers. We can only imagine how heavenly the cakes taste!