Sticky Toffee Pudding in a Jar for kids 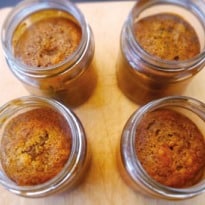 You'll need four 250ml ovenproof jars to make these heavenly little puddings. If you can't find muscovado, you could simply substitute soft brown sugar without it changing the taste too much.

1 Preheat the oven to 180C/350F/gas mark 4. Butter the insides of the jars using a piece of kitchen roll. Make sure the sides and bottom are completely covered.
2 Boil the kettle. Meanwhile, finely chop the dates and put them in a bowl. Sprinkle with the bicarbonate of soda. Carefully measure out 250ml boiling water and pour over the dates. Set aside.
3 Put the butter in a mixing bowl. Add both the sugars and mix well, until it looks almost creamy. Crack in the egg and beat well. Then add the golden syrup and beat again. Add the flour and stir with a wooden spoon until it's just mixed in. Pour in the dates and water mixture, then stir well.
4 Carefully half-fill the jars with the batter. Wipe any splodges off the jars and place on a baking sheet that has a rim (so they won't slide off). Bake for 20 minutes.
5 While you're waiting, put all the toffee sauce ingredients in a small pan. Set the pan over a medium heat and stir constantly as it comes to the boil. Turn the heat down and let it bubble, stirring now and then until deliciously smooth and thick.
6 Take the sponges out of the oven. They should be golden and springy. Spoon over some of the toffee sauce and pour the rest into a jug. Serve with a scoop of ice-cream and extra sauce.
The Kids Only Cookbook by Sue Quinn (Quadrille)

Sticky toffee pudding in a jar for kids. Photograph: Sue Quinn; The Kids Only Cookbook (Quadrille)