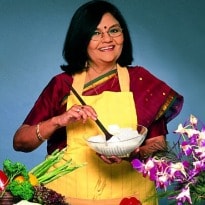 A celebrity cook and one of the most celebrated cookbook author, Tarla Dalal, died here on Wednesday following a cardiac arrest, family sources said. She passed away at her residence in south Mumbai. She specialized in vegetarian Indian cuisine and Gujarati food.

A widow, Dalal was 77 years old and is survived by three children. She leaves behind a rich legacy of over 17,000 recipes created by her.

A household name specializing in vegetarian cuisine, Dalal penned over 100 cookery books which sold more than three million copies. She was conferred the Padma Shri in 2007.

A terse announcement on her Facebook page Wednesday evening read: "We would like to thank all of you for your support and affection through the years of Mrs. Tarla Dalal's career. She is no more with us as she expired in the early hours of this morning. We thank her for all the happiness that her talent has given to us and our families."

Born in Pune in 1936 in a conservative family, she shifted to Mumbai after her marriage with Naveen Dalal in 1960 and launched cookery classes at her south Mumbai home in 1966.

With her unique and simple styles of whipping up the best of Indian vegetarian cuisine, Dalal's classes became very popular with a long waiting list of prospective women wanting to join and learn the culinary art.

At one time it was said among conservative Gujarati and Marathi households that if they wanted their daughters to get married, they must learn cooking from Tarla Dalal.In 1974, Dalal published her first cookery book, "The Pleasures of Vegetarian Cooking", which turned out to be a bestseller.

Over the years, the housewife-turned-celeb cook followed it up with more than 100 other cookery books with a wide variety of recipes and step-by-step cooking instructions which were lapped up by the hungry readers and young housewives.

Later, she hosted the popular TV cookery shows - "Tarla Dalal Show" and "Cook It Up With Tarla Dalal" on various private television channels which were telecast in India, and subsequently in south-east Asia, the US and Britain.

With her son, Sanjay, joining her, Dalal started one of the biggest Indian food website and a bi-monthly magazine, Cooking & More, besides penning cookery columns in various Indian and international publications.

In October, she shared via Twitter that she was "busy working on the launch of the Recipe Box, a Tarla Dalal cookery school to be launched in Mumbai soon".

Her books and articles were translated in several Indian languages as well as in international languages like English, Dutch and Russian.

She was known to have shared everyday recipes for housewives, thus targeting the masses and using ingredients that are easily accessible and known to all.

She also launched a line of ready-to-cook mixes under her brandname Tarla Dalal Foods (TDF), which was acquired in 1998 a subsidiary of US-based Bestfoods Ltd.

On her demise, Sanjeev Kapoor tweeted, "For me and millions of Indian food lovers around the world, Tarla Dalal is & will always remain India's 1st & original MasterChef"