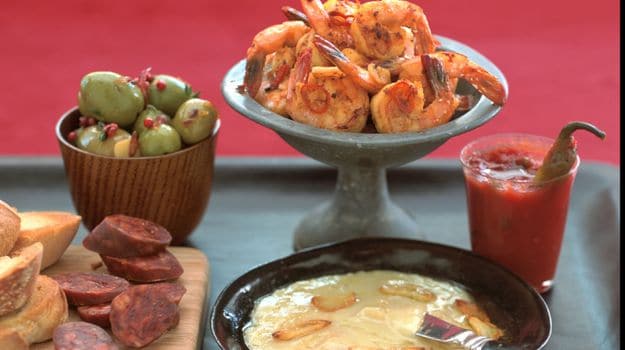 For Valentine's Day, what could be more romantic than a homemade dinner? If you are looking for that dish that says love, look to these five foods, which have been considered aphrodisiacs for centuries.

Aphrodisiacs were named for Aphrodite, the goddess of love. According to ancient Greek myth, Aphrodite was born from the sea and arrived ashore transported by either an oyster or scallop shell. Because of her sea connection all seafood, but especially shellfish, was considered an aphrodisiac since those times.Chocolate

Cacao beans, essential to making chocolate, first made their way to Europe from the New World in the 1500s. Once chocolate arrived, physicians and health writers began to study it and decided it was not only an aphrodisiac but also a cure-all for many ills, including indigestion. Casanova, famed writer of the 1700s, devoted several pages in his memoir to how effective chocolate was in getting women into the mood.

For hundreds of years spices that tingle the tongue -- such as red pepper flakes, cinnamon and ginger -- were thought to be aphrodisiacs. The idea was that if they make the tongue tingle they would make other body parts tingle, too. Chili peppers and these spices quicken the pulse and induce perspiration, which mimics the state of sexual arousal and also stimulates the release of endorphins.Strawberries and raspberries

Because of their seductive color, strawberries were called “fruit nipples” and considered powerful aphrodisiacs during the Renaissance.

The ancient Greeks and Romans worshiped and held yearly festivals for the wine god Bacchus, also called Dionysus, who was born from an affair between the god Zeus and a mortal woman. Wine, for the ancients, was not just a nice drink to have with dinner, but thought to be absolutely essential to good health. At that time, water was often filled with dangerous germs, whereas wine was safe. More than just essential to good health, wine was believed to be essential to life, making it one of the first and most popular aphrodisiacs.

Here are some recipes that feature these foods. While I can't guarantee they will be aphrodisiacs, I can promise they're delicious.

This dish is best eaten sizzling hot when the aroma of the garlic and saffron are most potent. For a dramatic presentation, cook and serve it in a small iron skillet.

1. Combine the shrimp, garlic, oil, saffron and jalapeño in a small bowl.

2. Heat a small skillet over high heat and sauté the shrimp with the marinade until the shrimp are golden, about 3 minutes. Season to taste with salt and pepper.

So many aphrodisiacs in one dish! Lovely Manchego is melted in a pan with a hint of garlic and then spiked with a splash of sweet sherry. The aromas will drive all the guests straight into the kitchen. The tomato jam, a spicy-sweet mix of tomatoes, sugar, jalapeño and lemon, is simple to make yet adds just the right zing to the warm melty cheese.

For the tomato jam:

Combine the tomatoes, sugar, jalapeño pepper, lemon zest and juice, salt, and cayenne pepper, if using, in a medium saucepan and simmer over medium-low heat for about 30 minutes, until thick. Allow to cool, and then transfer to a small serving bowl. Cover with plastic wrap and reserve.

1. Heat the oil and garlic in a small nonstick skillet over low heat until the garlic begins to turn golden, about 2 minutes. With a slotted spoon remove the garlic; set aside. Add the cheese in one layer and fry until warm and soft, about 1 minute. Remove the skillet from the heat and add the sherry. Cover the skillet and return it to the heat for 2 to 3 minutes.

2. Serve right in the skillet or slide the warm cheese onto a serving platter and top with the garlic. Serve with the tomato jam and bread on the side.

This flourless cake, has a crisp, macaroon-like outer layer and a dense, incredibly moist center. As the cake cools, it collapses a little, creating a pretty webbing on the delicious crust.

1. Preheat the oven to 350 F. Butter the bottom and sides of a 9-inch springform cake pan.

2. Melt the butter and chocolate in a bowl in the microwave.

3. In a large bowl, beat the sugar and egg yolks with an electric hand-held mixer until creamy and pale yellow. Beat in the chocolate-butter mixture until creamy. Add the potato starch and vanilla and mix until well combined.

4. In a separate bowl, beat the egg whites until stiff. Slowly, using a spatula, fold the egg whites, a little at a time, into the chocolate mixture until combined.

5. Spread the batter evenly into the prepared pan. Bake for about 30 minutes, until just set in the center. Allow it to rest for about 30 minutes before cutting it until it collapses and the top crust cracks a bit. Serve with strawberries on the side, if you like.