The Food Apps That Could be Bad for Your Children's Health 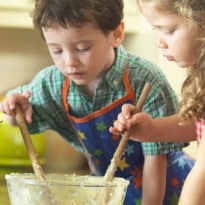 Kids enjoy food-based games - and tablets and smartphones offer a fun, interactive playing experience. But what happens when they are adverts for unhealthy processed food in disguise?

A children's gardening and food app recently won the digital equivalent of an Oscar, a timely gong given the current public focus on encouraging kids to cook. Dirtgirlworld, a game played on smartphones and tablets, teaches children how to grow food from scratch and cook up tasty meals. It's eco-friendly, full of right-on food messaging and charming enough. But are food apps for kids delicious fun or bad for their health?

The size of the kids' app market is difficult to get a handle on, but a survey by children's marketing specialist Kids Industries shows youngsters are chewing through them like, well, kids in a sweetshop. Its poll of 2,200 parents in the UK and the US revealed they download an average 27 apps a year for their children - more than one a fortnight. According to Ofcom (PDF), 28% of five- to 15-year-olds own a smartphone and 14% use a tablet, while a separate international study claims almost twice as many pre-schoolers can use a smartphone app (26%) as tie their shoelaces (11%). No wonder it's boom time for kiddie app developers.

I asked my junior judging panel of two (aged 11 and eight) to road-test some of the most popular cooking apps for kids. The verdict? Most of the games were declared a bit of a yawn, with a few exceptions. The hugely popular Cooking Mamma app (a spin-off of the video game), was the clear favourite. My judges vanished into a gaming vortex, touching, shaking and tilting the tablet as they "cooked" under the tutelage of the quite peculiar animated Mamma. Maybe it inspires kids to want to cook real food - and it did prove a most excellent digital babysitter - but I doubt kids learn much from it about cooking. Further, many users resent having to buy extra recipes on top of the £4.99 download charge - a common complaint with apps. But most depressingly, this exercise revealed just how many of the bestselling apps reflect the processed-sugar addicted world we live in: ice a cupcake, scoop some ice-cream, lick a lollipop, flip a burger, run a pizza joint.

Fast food companies are also getting in on the act and partnering with developers of the most popular children's apps. Last month Burger King launched a promotional campaign with the creators of cult game Cut the Rope, and McDonald's has teamed up with the makers of Angry Birds to lure kids through the doors in China.

The UK's Advertising Code states that advertisements must be "obviously identifiable as such". To many adults, these branded mobile games appear to be nothing more than adverts. However, in its review of 60 studies in 12 countries, the Family and Parenting Institute found that most children under 10 cannot recognise an advert disguised as a game. Worse, there is evidence that the games actually increase children's hankering for foods high in sugar, salt and fat.

As the child obesity debate rages on, food manufacturers in the US have also come under attack for "hooking" children on to junk food via mobile games. Nutritionists and psychologists have called for tighter controls on companies marketing "nutritionally poor" foods to kids this way. While new voluntary restrictions on junk food advertising will be phased in by 2016, it's unclear whether they will actually apply to smartphone and tablet apps.

Even the most benign brands get it wrong. In February, the advertising watchdog ordered Weetabix to shut down its Weetakid app, ruling that the game made children feel inferior if they did not eat the cereal.

John Kent, digital director at Kids Industries, says smartphones and tablets present a "new and tricky landscape" for brands and consumers to negotiate.

"The iPad only came out in 2010 - multi-touchscreens didn't really exist before then - so this is new territory," he says. "A game is part of a learning experience for a child and organisations want to engage with children this way. At the same time most of them are very aware of their responsibilities to get it right and they know they will be shot down if they don't. It's a challenge."

Kent says gaining the trust of parents is crucial for any organisation that wants to reach children via online games and apps. Recent cases of children running up bills for hundreds of pounds without their parents' knowledge by clicking through to paid-for content simply shouldn't happen, he says.

I confess to paying little regard to the apps my kids want to download, beyond asking them what they cost and what they involve. Next time, a supervised game of "spot the advert" might be in order before they get cooking.

Kids need supervision when playing online just as much as they do when helping out in the kitchen. Photograph: Alamy