Inside the Food Factory of the Indian Railways 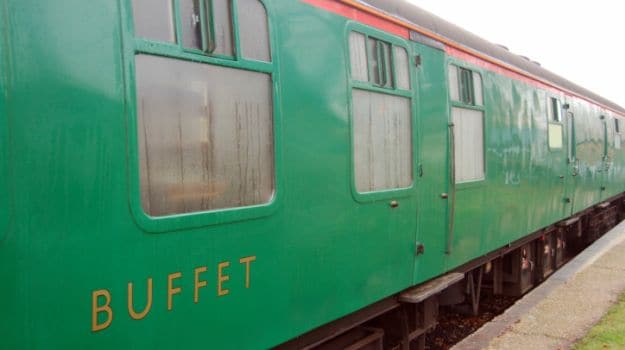 Massive chappati makers that roll out uniform-shaped chapatis in less than 80 seconds, steam kettles, which cook up tonnes of well made rice and a cutting machine that chops up about 400 kilograms of vegetables in an hour-- the Indian Railway's mammoth kitchen is a state-of-the art wonder.

The central kitchen in Noida works round the clock to provide "hygienic, competitively priced and affordable meals" not only to rail passengers but to corporate clients too. The automated four-storeyed 'Food Factory', set up in February 2012 churns out over 10,000 meals per day to be served up on some Rajdhani, Duranto and August Kranti trains.

"The kitchen is fully automated with latest equipments from the best of the manufacturers in India and abroad," says Sudheer Warrier, AGM IRCTC. Raw materials are stocked in a store room on the ground floor, with pulses, rice, spices, vermicelli, and other "dry" items segregated neatly with indicating labels. "While all perishable items come in regularly every morning, the dry items are stocked for about three days," says Warrier.All perishable food items like vegetables and fruits are washed and sanitised before being moved to be chopped up on the upper floor. "We use chlorine tablets to sanitise vegetables," Warrier says. Vegetables are sourced from Mother Dairy and the non-perishable food items come from the Metro Cash and Carry outlet near Karkardooma Court.

(Is railway-station food finally getting good?)

The kitchen has just installed an Effluent Treatment Plant (ETP) to segregate different forms of waste into reusable air and water. "We plan to use this reusable waters in toilets and cleaning floors," says Warrier.

The process of chopping bulk amounts of vegetables in a couple of minutes makes for a fascinating sight. "Our vegetable cutting machine comes from the Swedish company Hallde. It can chop about 400 kilograms of vegetables in a matter of one hour's time," says Warrier. "We are targeting 25,000 meals by the end of this year," he adds.

(Demand for Packaged Food Rises as Vegetable, Fruits Get Expensive)

Potato peelers and batter makers, particularly for South Indian dishes like idli and vada are also used in the same section. Equipment is sourced from across the world like  Hallde from Sweden, Rosinox from France, Hackmann from Finland and Sottriva from Italy besides the Ahmedabad based Servotech.

Preparation of chappatis is an awe inspiring process where the dry flour is converted into a perfectly round and cooked roti in less than 80 seconds. "We add water to the flour in dough kneader to prepare the dough. Then it is transfered to the roti-maker, which pulls out round chunks of the dough, presses it to form a chapati and then cooks it properly before it is packed and sent out," says Warrier.

Breadsticks relished especially by children on train rides, is among the few food items that require manual labour, with the dough being shaped by hand. "It is then baked in an Italian rotary oven at about 195 degrees."

Giant steam kettles, brat pans, cold rooms, hot plates, and blast freezer are among other instruments used in the central kitchen. "The steam kettles cook uniformly and are based on the concept of using the steam generated for cooking rice," says Warrier. The mega kitchen also has solar panels set up exclusively for heating water that is used for washing dishes, while for drinking and cooking, there is an RO water treatment plant.

Owing to its swanky appearance, automated appliances, and the delectable food that rolls out of this behemoth kitchen, it has also been featured on the show "India's Megakitchens," on National Geographic Channel. Hosted by celebrity chef Vikas Khanna, the show, which premiered on June 29 is scheduled for a repeat telecast on July 8.