East Central Railways Zone took a railway coach and converted it into a full blown cafeteria complete with beautiful interiors and delicious snacks. 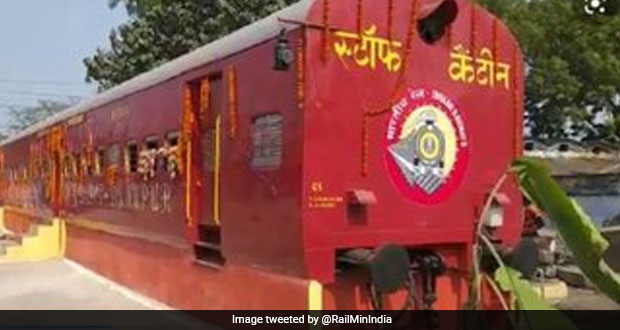 The Indian railways came up with an innovative solution to their lack of canteen space.

Indians are known world-over for the skill of making the best of what they have, aka 'jugaad'. When posed with the problem of not having a cafeteria close by, the Indian Railways' East Central Railway (ECR) Zone in Patna came up with an eclectic solution. The department took an unutilised coach and converted it into a full blown cafeteria complete with beautiful interiors and delicious snacks. It is quite spacious and can easily accommodate up to 40 people in a single seating. News agency ANI shared the pictures of the novel café on Twitter.

Bihar: An unused railway coach, at Patna's Danapur Coaching Depot, has been developed into a cafeteria. Anil Kr, Coaching Depot official says "Staff had been complaining since 2 yrs about absence of a canteen.There are no hygienic hotels in this area. So we thought of this."(04.2) pic.twitter.com/z36fRDPFnC

The complaint had been ongoing for quite some time, as employees of the Danapur Coaching Depot near Patna complained about having to walk several kilometres for basic food and refreshment needs. The personnel of the department took the initiative, found an empty coach near the Water Recycling Plant at Danapur Coaching Depot took permission from the authorities and got it up and running!

Anil Kumar, an official from the Coaching Depot of ECR said to ANI, "Staff had been complaining since two years about absence of a canteen. There are no hygienic hotels in this area. So we thought of this." The railway coach has been beautifully decorated with balloons and streamers, and is equipped with all the supplies necessary for facilitating the canteen's smooth functioning. The interiors of the coach also feature some traditional paintings and a typewriter too. Take a look at the well-decorated interiors of the coach shared by the Railway Ministry of India.

Promoted
Listen to the latest songs, only on JioSaavn.com
— Ministry of Railways (@RailMinIndia) February 6, 2020

Although the interesting cafeteria is only up on a trial basis as of now, the results seem positive. Users on Twitter too commended the skills of the East Central Railway (ECR) Zone. We hope this interesting idea fires up more such thoughts and cafeterias in future too!