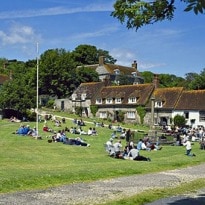 It's not the beach, the walking or the weather: finding a good place to eat can turn a good holiday into a great one

For a long time, a friend of mine has based her summer holiday almost entirely around a single restaurant, returning to the same place year after year to make full and liberal use of its delicious menu. I used to wonder about this. The crab sandwiches sounded excellent, and the cod and chips. But I sometimes wondered if she didn't ever have the urge to plan a trip around something other than this miraculous cafe. Didn't she ever hanker for picturesque ruins, or a good gallery? What about walking? After a really long walk, I'm usually so hungry, the question of whether the potatoes are local and organic, and the chicken free-range, seems almost not to matter (emphasis on the almost). It turns out, though, that I was missing the point. As I discovered the other weekend, it's not that the right caff can improve a trip immeasurably; it's that it can make it. All the more so should you happen to stumble on it by chance.

We were in Sussex for the bank holiday, and I'd booked us into a pub in East Dean, a village which, when I Googled it, looked to be brilliantly close to the sea at Birling Gap and to have come straight out of Miss Marple (in fact, it has a link with another famous detective, being supposedly the place where Sherlock Holmes retired). The plan was that we would eat a giant cooked breakfast at the pub, walk all day, and then head out in the evening for supper, to Alfriston or Eastbourne, or perhaps even to the Curlew at Bodiam, where some young dude reputedly does moderately exciting things with foam. But then the plan went awry. For one thing, the cooked breakfasts weren't up to snuff. For another, the weather was mostly freakishly good, so we were able to be outside all day. Result: by midday, we could have eaten a ranch.

I'd seen the Beehive Cafe and Delicatessen across the green, and hadn't felt very hopeful. I couldn't see how so tiny a village as East Dean could sustain a one-stop shop for swanky bottles of Italian olive oil and tins of Spanish tuna, both of which I could make out in its window. (Question: who buys those really huge tins of Ortiz tuna, and what the hell do they do with them?) But when we retreated inside it on our first lunchtime, our cheeks striped flamingo pink and our boots like freighters on our feet, I realised in as long as it took me to say the sacred words "coronation chicken" that there was more to it than panettone. The Beehive is tiny; I reckon it could seat 15 people at most (though there are tables outside, and the green to be lolled on). But its owners have endeavoured to think of everything all the same. Their deli, with its singular and probably hard to please clientele (Kia-driving Eastbourne commuters, snowy-haired members of coach parties to Beachy Head, militant prowlers of the South Downs), seems to me to be the platonic ideal of a 21st-century caff. For those in search of something to take home: local cheese and yoghurt, good ham and bread, homemade cakes and brownies, posh chocolates (also, the aforementioned coronation chicken, which I, for one, could have eaten until I was sick). Meanwhile, for those needing sustenance for the climb to the Belle Tout lighthouse: cheese and onion toasties, bacon sandwiches, sausage rolls, raspberry ripple ice-cream. Oh, yes. The coffee is good, too.

The Beehive made our weekend. We planned our days around it. When it was sunny, it was a source of lemonade; when a downpour looked to be on its way, we banked on it for tea and scones. It wasn't cheap, but nor was it expensive, and the smiley owners made it plain that they were perfectly happy for us to sit there and read the newspapers they'd provided; nor did they fuss about our boots. In return, they got not only our custom, but our gratitude, too, which was probably quite pathetic to behold, Britain still being a country in which one travels hopefully - at least when it comes to cafes and restaurants - only to arrive and discover that the darling little place with the yellow Formica tables where you'd hoped to find freshly landed haddock or lobster serves only battered saveloys, frozen pizza and Panda Cola. I suppose it is ersatz, in the sense that its tinned tomatoes were from Tuscany, or somewhere, and displayed on shelves Jamie Oliver-style rather than warmed up and served on toast. But better ersatz, surely, than reeking of cooking oil and spilled Tizer - and, to be clear, I write as someone who really loves Tizer.

East Dean, Sussex: 'The Beehive made our weekend. We planned our days around it.' Photograph: Alamy

Street Food Of India: How To Make Delish Ragda Chaat At Home
Watch: You Must Try These 4 Bhindi-Based Recipes For An Appetising Meal