The Return of Childish Things: Cafes That Specialise in Toast and Cereal Milk 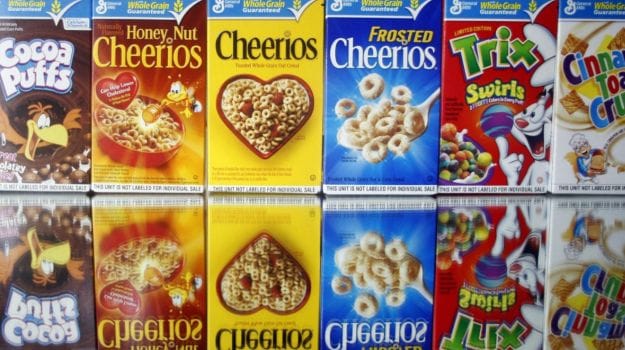 Nursery food fads: the milk where the cereal has been is the star attraction at a cafe in Sydney. Photograph: Rick Bowmer/AP.

In Australia’s big cities you can buy a bowl of milk that once had cereal in it or eat at a cafe that specialises in toast. Ultimate comfort food or a world gone mad?

“When I was a child, I spake as a child, I understood as a child, I thought as a child: but when I became a man, I put away childish things,” so spake chapter 13 of St Paul’s first letter to the Corinthians.

So yes, I have put away the childish things (even though I am not a man). But right now Australian cafes are busy putting them back out. They’re putting out bowls of cereal, cups of milk, kittens and plates of toast. And we – like big kids missing our kindergartens and nurseries – seem to be lapping it up.

This month a cat cafe will open in Surry Hills in inner-city Sydney that is a “tribute and a home to brave astro-cats returning to Earth with many a tale of outer space adventures in galaxies far far away”... whatever that means. There is already a cat cafe in Melbourne (“Would it feel like visiting a grim, sad brothel ... only with cats?” asked the Guardian’s Jessica Reed). Patrons order drinks and pet cats. Purr-lease!

As for nursery food fads, at Dr Faustus in Surry Hills you can order cereal milk. It’s not even cereal – which you can order at Melbourne’s cereal cafe, Cereal Anytime. Instead it’s the milk where your cereal has been.

Remember when you were a kid and you left your cereal in the bowl for too long and the milk would take on the flavour of the cereal and the colouring would taint the milk like a bruise? That’s what this is.

At Dr Faustus all the old childhood favourites are on the menu including Milo, Nutri-Grain, Coco Pops and Honey Nut Crunch. We weren’t allowed sugary cereal when I was a kid, so this nostalgia trip for me is purely academic.

Time Out has described the cereal milk dish at Dr Faustus as milk that “gets poured over breakfast cereal to capture the sugar and gentle, nutty grain flavour before being strained into a tall enamel cup with heaps of ice”.

But in real life mine arrived as a cup of milk with a small amount of cereal spooned on top and a side of lollies including jelly snakes and raspberries. It’s $5 for a small, $7 for a medium or $9 for an extra-large.

I ordered the Froot Loops that I was never allowed to have as a child and let it sit for a while. The milk turned blue.

Sipping it through a bright yellow straw, I must admit I didn’t really enjoy it, as I’m not used to drinking cups of milk. South of the border though, this trend for childish food continues.

As well as the aforementioned cereal cafe, Melbourne is now home to a toast cafe. Most cafe in metropolitan Australia are essentially toast cafes (insofar that you can buy toast at many of them in the morning), but a cafe that is singularly devoted to toast all day is quite unique.

At the time of my visit, Crompton Coffee, on the slightly desolate Kew side of Richmond, had been open for 10 weeks.

You can get the usual toast with Vegemite or jam. But it’s the more exotic toast ($14.50 for two) that is the drawcard here: toast with Nutella, candied hazelnuts and fresh mint; toast with hummus, cucumber and chilli flakes; toast with thyme-grilled pears, blue cheese and walnuts; toast with vanilla-poached quince, ricotta, honey and black pepper ... you get the idea.

The toast part is to these dishes what base is to pizza – a thing to stop the ingredients from falling on your shirt, but not the thing that brings you in the door.

The toast in the toast cafe is fine, no complaints. It’s fairly good, thick standard bakery bread. But it’s the stuff on top that makes the meal.

I tried two. The toast with thyme-grilled pears, blue cheese and walnuts had a good flavour balance between sweet and savoury, and the bread didn’t intrude too much (ie the dish didn’t feel too doughy).

But the toast with pumpkin, feta and caramelised onion fell a bit flat. It was all soft, sticky toppings and needed some texture – maybe pine nuts – to make masticating more interesting.

It’s funny watching the dude “cook” my meal. The kitchen is comprised of a bank of three toasters. He puts the bread in a toaster and presses the handle down.

My dining companion is a fan of the concept, however. “It’s my perfect lunch,” she says, as she has a third slice of toast (the very good prosciutto and pesto toast). “It’s something more complex than the toast you’d make at home, chiefly because you don’t have the ingredients.”

Yes – who would go to the effort of poaching pears only to stick them on a bit of toast?

My take home on all this? It’s novelty food, up there with cat cafes. There is obviously a market for these childish things, but for me? Pass me the degustation menu (preferably in French), thanks.