The third edition of the World Week of Italian Cuisine kick-started on Friday, 23rd November 2018 in Delhi with great aplomb and flair. 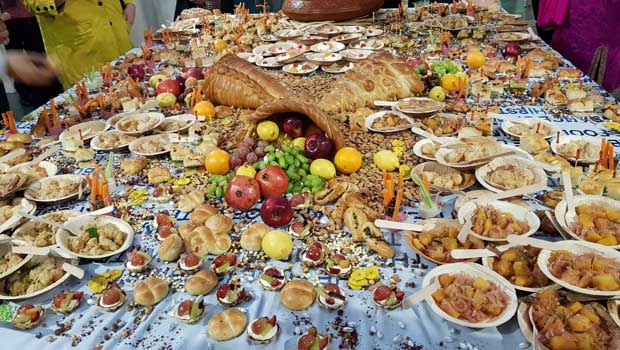 The third edition of the World Week of Italian Cuisine kick-started on Sunday, 25th November 2018 in Delhi with great aplomb and flair. The festival, known to be a gastronomic extravaganza from its earlier editions, would also be hosting plenty of invigorating panel discussions, workshops, competitions, tasting sessions, food walks, and spectacular performances. The celebrations would close with a luxury symposium featuring iconic Italian F&B brands. The events are lined up in various locations around the city like IICA, The Chanakya, Hyatt, Sorrento, PUSA  Institute and the Italian embassy. The festival is an ideal time for seasoned and budding entrepreneurs, chefs, sommeliers, and food enthusiasts In India to get an insight and exposure into the ever-burgeoning food sector of Italy.

The Ambassador of Italy, H.E Mr. Lorenzo Angeloni tells us how the festival is aimed at bringing nations together, " it involves more than 300 Italian Embassies and Consulates all over the world and has become a major driving force behind Italian exports in the agri-food sector as well as a crucial lynchpin of the tourism industry."

Recognising the love for food shared by both the countries, he adds, "Italy and India are two gastronomic superpowers, sharing not only a commitment to excellence in food preparation but above all the concept of "conviviality". The pleasure of sharing food with others, especially with family and friends, is a corner stone of our two cultures. We should build upon those similarities, building bridges between our two culinary traditions, nurturing the passion and talent of Italian and Indian young chefs by organizing, as we are doing in these days, joint cooking classes. Italian food, as Indian food, is a surprisingly diverse cuisine. Each Italian region has a distinctive set of flavours, recipes and ingredients. We would like Indians to be introduced to these mouthwatering delicacies and to be tempted to choose our country as the top destination for their gourmet trips."

The Grand Opening of Week of Italian Cuisine took place at Chanakya Mall on Sunday, 25th November. This was followed by a scintillating Opera performance. Another major highlight of the event was of course the Italian Aperitif that took place in the food hall at The Chanakya. Chef Bruno Ruffini gave a unique interpretation to the Italian snack tramezzino and enriching it with regional flavors. Plenty of other Italian finger foods and wines were on offer too. A Gelato corner and Extra Virgin Olive Oil tasting counter was one of the main attractions of the evening.

On 26th November, the action is expected to shift to multiple locations such as Institito Cultura and IICA school for a host of conferences and workshops. On the 27th, Sorrento Restaurant at Shangri-La Hotel in Delhi will host a workshop on Gelato Italiano and a competition between Italian and Indian prestigious schools of cuisine. In the ultimate face off, students from ALMA , IICA and PUSA would battle it out to make some sumptuous Italian treats for the audience. Next, a major conference has been organised on 28th November, and this would be on the Mediterranean diet, which also happens to be the main theme of third edition of the Week of Italian Cuisine. Mediterranean diet has emerged to be one of the most talked about cuisines in the world of health and nutrition lately, the conference would discuss what has contributed to its global popularity.

The festival would also see many bigwigs of the Italian food industry such as Chef Carlo and Chef Ruffini participating in various events. Chef Cracco along with India's very own Chef Ritu Dalmia would also be hosting a Gala dinner at the residence of the Italian Ambassador on Thursday, on 29th November. The park of the Ambassador's residence will be dressed up in scintillating lighting and decorations. About 150 guests will have the privilege of tasting the delicacies. Also on the 29th of  November at Hyatt, one can witness a grand symposium which is being conducted in cooperation with ace designer Ritu Berry. The symposium would be featuring luxury wine and food brands of Italy.