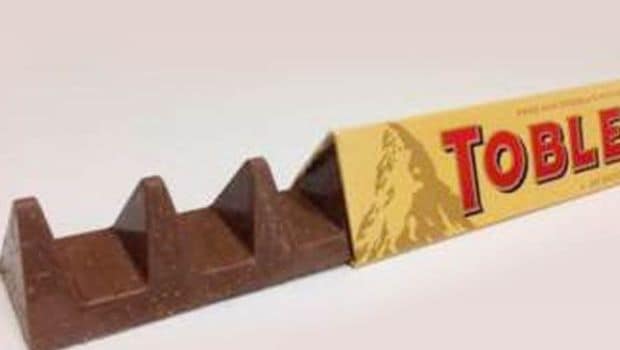 Highlights
More valleys, fewer peaks: The maker of Toblerone Swiss chocolate has widened the spaces in some of its iconic, triangle-array bars, offering about 10 percent less product for the same price. Fans are outraged.

The multinational says the move — which affects products globally, though mainly in Britain — was necessary to cope with higher prices for ingredients. But many consumers are livid at the perceived sleight of hand and the change to the traditional look of the treat, first created in 1908 in Switzerland.
"The shape of the bar may have looked like the Swiss Alps before, now it's a bit more Holland," said British consumer Tony Mathews.

For many, the Toblerone is linked to travel — a gift purchased at the airport before boarding a plane home — though it is increasingly available in supermarkets and shops.

Mondelez International, based in Deerfield, Illinois, said that pricing targets by U.K. discount customer Poundland prompted the change in Britain. It said the retailer, which sells goods for one pound ($1.22), resisted a price increase, leading to the solution of offering less chocolate instead.

Mondelez said that Britain's vote to leave the European Union was not to blame. But it comes as British food retailers have faced rising prices for imported goods due to the drop in the value of the pound since the June vote.

In a shift akin to widening a donut's hole, the tweak in Britain involves shrinking a 170-gram Toblerone sold by British discounters like Poundland to 150 grams, said Mondelez spokeswoman Heide Hauer. The price remains the same.

Some British consumers likened the new shape to a toothless comb, others to the mouth of a crocodile. Some joked about how the issue was grabbing headlines on the same day as Americans were electing a new president.

The signature 100-gram Toblerone bar and other vendors are not affected, Hauer said. But Toblerone also has trimmed its super-sized 400 gram product — often sold in airports — to 360 grams globally, for the same recommended retail price, said Hauer.

Michael Payne, executive director of the International Association of Airport Duty Free Stores, noted that duty free stores sell Toblerone in a variety of sizes, so he's not sure how this change would affect sales.

Hauer from Mondelez cited "a multitude" of factors like rising commodity prices, a regular review of pricing and the fallout from a weakening of the Swiss franc in early 2015 that caused a spike in production costs.

The switcheroo in Britain, which began in September, was weeks in the making: Toblerone's official Facebook page featured a post on Oct. 15 explaining that the company was facing higher costs for "numerous ingredients."

"We carry these costs for as long as possible, but to ensure Toblerone remains on-shelf, is affordable and retains the triangular shape, we have had to reduce the weight of just two of our bars in the U.K., from the wider range of available Toblerone products," it said.

Economist Pippa Malmgren, who has studied what she calls the corporate practice of "shrinkflation," believes the company was using the recent political situation in Britain to test to see if people would notice.

"Whole divisions of major companies" are devoted to shrinking a product while keeping the price stable, she noted. She estimated that about 10 percent of the Toblerone candy bar was dropped.
"This is an art form," she said. "This is not random."

Another analyst warned of a possible consumer backlash more broadly.

Promoted
Listen to the latest songs, only on JioSaavn.com
Robert Haigh, director at consultancy Brand Finance, said the move by Mondelez was "quite risky" and could be seen as "deceptive."

"They don't seem to have the reverence for traditional confectionery that the previous owner did," said Haigh said, comparing the chocolate bars to a well-known British savory spread made from yeast extract. "Like Marmite, Toblerone has an impact on the cultural consciousness that far outweighs its actual popularity."