Brown Sauce Sales are Falling: Has Britain Finally Come to its Senses? 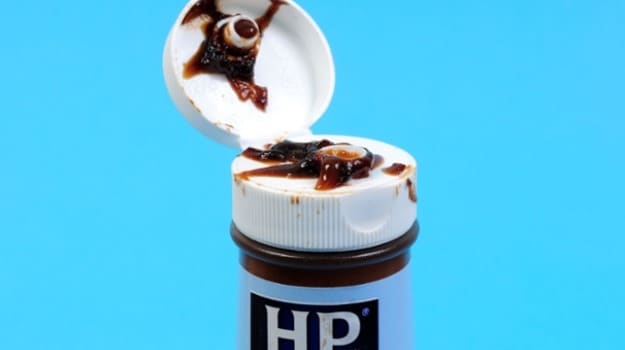 It was a product of the British empire, and should have gone the same way. But, somehow, brown sauce maintained its place in Britain's affectations for decades - until now, when sales are reportedly down by 19%. It's about time we said goodbye to this taste-bud bully, says one hater

Lord knows on this, the blackest of back-to-work Mondays, we need some good news and reports that sales of brown sauce are plummeting is, surely, reason to rejoice. Yes, according to research by Mintel (research that is, naturally, disputed by Heinz), volume sales of the nefarious brown - less condiment than contaminant - are down by 19%. This can hardly be described as the death knell for HP and Daddies, we still eat 13m kg of this goo each year, but it nonetheless represents a glimmer of hope that Britain's relationship with food is, finally, maturing. Or is it?

Created in the late 1800s, brown sauce reads, tastes and smells like the idle creation of some Phileas Fogg-type, just back and hugely, over-excited about his adventures in the British empire. Dates! Molasses! Tamarind! Cloves! Cayenne pepper! It is not so much a recipe as chauvinistic flag-waving, a smug, muscle-flexing case of: "Look at the size of our spice cupboard." Said exotic ingredients were combined, moreover, with all the sensitivity of the period. Just as in the age of empire we ignored or abused indigenous peoples, so too their ingredients. In brown sauce, they were used to produce an unholy trinity of brutal sweetness, acrid spiciness and vile vinegary twang - one peculiarly British in its lack of culinary sophistication.

That brown sauce was actually invented, more prosaically, by a Nottingham grocer hardly matters. Everything about it, and particularly that picture of the houses of parliament on a bottle of HP, surely confirmed it as the sauce of the establishment. This was the perfect table sauce for jowly, Victorian and Edwardian gentlemen whose palates were so befogged by years of brandy and cigars, grouse and spotted dick, that only this shrill alarm of a sauce could pierce that bleary, weary gastronomic gloom.

Reputedly, Harold Wilson exaggerated his love of HP (it became known as, "Wilson's gravy") because he thought it portrayed him as a man of the people. However, in reality, it was already the habit of a man out of time. You can bet that, by the 1960s, the Beatles and Britain's other hep cats were already gravitating to the sunnier, smoother and far sexier US flavours of ketchup (production of which had been suspended in the UK between 1939 and 1948). Undoubtedly, in the land of bland, under-seasoned food, you needed something to jazz up your dinner, but why choose effluent when tomato sauce was in play?

It is an argument that continues to this day, of course. Perhaps seriously heavy, meaty food can, in certain exceptional circumstances, benefit from the fruity tickle and perky spicing of brown sauce. It is tolerable with, say, corned beef hash or a scotch egg. About 99% of the time, though, it is just a bully, a clod-hopping collision of flavours marring good bacon on a butty, skewing a plate of sausage and mash, or obliterating the varied, relatively delicate flavours of a full English. It was a sauce for people who, because the food they were eating was so bad, had no interest in tasting it.

We eat very differently in 2014. As Richard Ford, senior food analyst at Mintel, puts it: "The most common reason for less frequent users to forgo table sauces is that their typical meals do not require these." Whether you exist on pasta ready-meals and takeaway curries, or cook from scratch at home and deliberately buy in fine ingredients prized for their intense flavours, brown sauce has no part to play in that scenario - unless you really like wasting money or have a sick and despicable habit of smothering pizza in brown sauce. In which case, you need to seek professional help.

It is tempting, very tempting, therefore, to put the positive spin on this. If brown sauce really is in decline (and sales of tomato sauce are down by 6%, too), could it be that, in Britain, we are belatedly waking up to the pleasure of tasting ingredients for what they are? Are we now enjoying food in its infinite variety, rather than how it tastes circumscribed by ketchup and HP? Well, maybe. And maybe not. Up in Edinburgh, "soss" (brown sauce, inexplicably, let down with even more vinegar) remains essential to fish 'n' chips while, more significantly, BBQ and other exotic world food sauces are growing in popularity.

Indeed, 40% of regular table sauce users now express a preference for hotter sauces, which suggests that, far from mellowing out, Britain is on the cusp of going nuclear. Could it be goodbye HP and hello Reggae Reggae and piri-piri? Or have you cut out condiments altogether, in order to actually taste your food?