The steam from under the pots cooks these Ramasseri idlis to a soft texture and much thinner than the conventional idli. 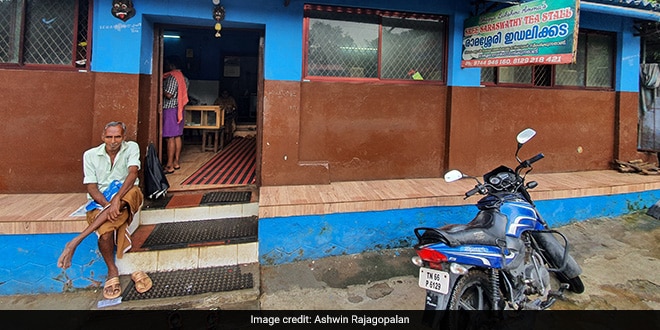 These Ramasseri idlis here are super soft in texture.

It's easy to miss the tiny detour on National Highway 544 between Coimbatore and Palakkad, especially on a typical monsoon day with an incessant drizzle. My destination was Ramasseri, a tiny village near Palakkad that is no longer nondescript. I first heard of this village in 2013 during a fabulous meal at Karavalli, The Taj Gateway in Bengaluru. Chef Naren Thimmaiah, the mastermind behind this restaurant, and his team travelled extensively through Karnataka and Kerala to look for original recipes and dishes that hadn't been put under the spotlight. One of those trails led to Ramasseri and its ultra-soft Ramasseri idli. I had resolved to visit this village almost ever since.

It took me almost six years to make this trip. It was another meal this time at Kappa Chakka Kandhari, one of Chennai's finest Kerala cuisine restaurants, that was the final nudge I needed. A series of twists and turns through the rain brought me to the doorstep of Saraswathy Tea Stall. It's here over piping hot idlis and kattan chayya (black tea) that I discovered the fascinating story of the humble Ramasseri Idli.

The steam from under the pots cooks these idlis to a soft texture.

A story that began almost a century ago. That's when Nisha's (who manages this stall with her mother) forefathers left the Thanjavur district in Tamil Nadu and made Ramasseri home. Nisha tells me about how about five to six Mudaliar families from Tamil Nadu began to make these idlis. They would sell these idlis in baskets around the village before setting up tiny eateries. It's only after I go backstage to this pokey eatery's equally crammed kitchen that I understand why these idlis are unique. It's the cooking method. I watch Kumar, one of the cooks, painstakingly pours the idli batter into flat clay steamers and stacks them up. The steam from under the pots cooks these idlis to a soft texture and much thinner than the conventional idli. These idlis will remind you of a thick dosa and melt in your mouth. Aside from coconut chutney and sambar, there's also a spicy idli powder that is one of the popular accompaniments that regulars swear by.

I had to wait for a table - thanks to an entire bus load of visitors from near Kochi who made a breakfast stop a day before Onam. Interestingly, it's only these five or six families who continue to make the Ramaserri idli within the village. According to Nisha, this unique cooking technique has been passed on from one generation to the next within these families.

These idlis will remind you of a thick dosa and melt in your mouth.

It's the same batter made with rice and black urad dal but it's a completely different cooking technique, one that's tough to replicate outside Ramasseri. Although the versions I tried at both Karavalli and Kappa Chakka Kandhari (made by one of the cooks from Ramaserri) come close, it's still not quite the same as eating this Ramasseri idli. Maybe, it's the approach to this village, through lush green paddy fields or the dining experience. Above all, it might just be those flat clay steamers that tirelessly churn out among the best idlis I've ever sampled.