Tickle Your Taste Buds with Kashmiri Wazwan This Eid 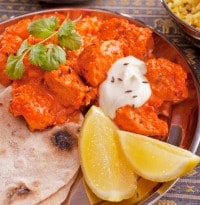 Fitness Gurus might do their best resisting the delectable but calorie-rich Kashmiri Wazwan cuisine but lovers of good food can hardly do so, more so with Eid round the corner.

As one of the most tasty non-vegetarian foods in the world, Wazwan has an intriguing history. While some suggest this special cuisine came to Kashmir from Iran, others argue the food is indigenous to the Valley. And the unending list of additions to this feast might owe itself to the exposure of local chefs, called Wazas, who specialize in cooking the Wazwan, to outside influences.

"The best Wazas traditionally come from the old city areas of Srinagar. The families of Wazas lived in the (congested) Wazapora area of old Srinagar city and we had many such families in the past," said Bashir Ahmad, 48, one of the few traditional chefs who is still keeping up the family flag flying.

"Now the times are changing. Of the known and reputed families of traditional Wazas, only four or five are still engaged in the profession. Members of other traditional Waza families have diversified into other fields as their younger generations picked up an education," Ahmad told IANS.

He said people from almost everywhere in the Valley have started cooking the Wazwan, although the connoisseurs of this food would not settle for anyone but the best Waza to cook marriage feasts.

The Wazwan is cooked in special nickel-plated copper vessels over simmering fires of wood, preferably from old fruit trees.
An average Wazwan has over a dozen-and-a-half dishes, most of them mutton and chicken based, besides the growing additions like mushrooms, vegetarian dishes and innovations on the traditional mutton-based ones.Some of the commonly cooked Wazwan dishes are tabak maz (fatty lamb ribs deep fried in ghee and served sizzling hot), rista (balls of thoroughly minced mutton cooked in a rich, oily gravy of spices and red chillies), rogan josh (large mutton pieces cooked in a rich spicy gravy), aab gosht (large pieces of lamb's shoulder cooked in milk without any hot spices) mirch korma (small pieces of mutton cooked with lots and lots of red chillies and other spices).

The king dish of all the Wazwan feasts that tells the guests that the nearly two-hour-long indulgence of eating and chatting is over is the gustaba (large balls of thoroughly minced mutton cooked in yoghurt, butter and other spices without chillies).

There are many other dishes like kebabs and methi maz (dry fried or gravy chicken), apart from pulao, curd, chuttnies and cold drinks.

Guests arrive at a large hall, where four of them assemble around a large tin-coated copper plate called the trami on which the Wazwan is served.

Dressed in neat, white cotton pheran (a traditional Kashmiri overgarment) and wearing a white skullcap, the Waza serves different courses moving from one trami to the other course after course.

"A middle-class family nowadays serves a trami of four guests with four kilograms of mutton, in addition to the chicken and non-vegetarian dishes during marriages.

"The upper-class families serve anything between five to six kilograms of mutton per trami, in addition to chicken and other dishes," Bashir Ahmad said.

If one wants to take the entire feast home for four persons - one trami - it would cost anything between Rs.3,000 and Rs.4,000 depending on how lavish it is intended to be.

One of the later-day developments in serving the Wazwan to guests in Kashmir is the buffet service. All the dishes are lined up on a buffet table and the guests pick the dishes of their choice.

"This saves time and also ensures that a guest eats only his choice of the feast without wasting any dish that might be served on the trami but the guest does not want to eat," said Khwaja Nisar Hussain, a retired chief engineer.

Some of the renowned local families of Wazas like Ahad Sons are now selling canned Wazwan dishes and these are already a rage in Kashmir and outside.

"Our products are available in metros like Delhi and have applied for an international food licence so that Wazwan is available to foreign lovers of Kashmiri feasts," he added.

With the Muslim festival of Eid-ul-Azha drawing close on Wednesday, most well-to-do families here have started placing orders with the Wazas for the feast, which is cooked by the chefs at their own places and then sold to the customers for serving at their homes.