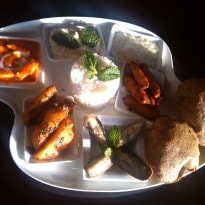 This navratri it's time to try out new flavors. During the nine day fast, restaurants are offering options instead of the regular 'saatvik' thaali...

"We also serve green black mushroom, stuffed eggplant, rice and noodles and any vegetarian soup. All these dishes can be prepared without garlic. Even garlic-based sauce like garlic and Schezwan are replaced by ginger chilli or soy chilli sauce," Royal China director Aashita Relan told IANS.

The fine dining Chinese cuisine restaurant decided to start such special menus for the Hindu festival as they believe that most Delhiites turn vegetarians during this period.

"The festival is a big one which is mostly celebrated in Delhi. Eighty percent of people become vegetarians for these nine days. We thought of giving more options to our customers and so came up with this special menu," said Relan.

Another capital-based restaurant, Amsterdam Kitchen and Bar, serves all-day dining signature dishes like buckwheat nachos with tomato salsa and paprika dust, crispy buckwheat florets with spinach and potato with hot Salsa and much more. Prices start from Rs.350."We are a Europe-based restaurant. Puri aloo is quite common during this festival. I wanted to do it in a different way. The dishes are basic and the ingredients are same as Indian cuisine for Navratri. But our food items have European taste and texture," said Amsterdam Kitchen and Bar head chef Abhinav Sharma.

"Onion and garlic are not always important to prepare a dish. We use ingredients like rosemary and rock salt to make dishes flavoursome," he added.

The European Navratri Platter
But they also have Indian dishes options like jeera aloo razilaa, ajawini tamatar paneer, pumpkin raita, navratri rice, sabut dana, kheer, aloo singhara ki tikki and more. You can gorge on these delicacies with a complimentary glass of buttermilk.

Those wishing to indulge in Indian cuisine can also head out to:

* Renaissance Mumbai Convention Centre Hotel: The 'Satvik Khana' is served at the "subzi (vegetarian)" station in the buffet spread. It offers vegetables and other dishes like sakarkandh ki kheer, singhade ka halwa, singhade ki bhaji, papad mangodi ki subzi, mooli ke patton ka saag, moog aur methi ki bhujiya and much more. Along with this, there are more vegetarian options on the a la carte menus. The cost for lunch is Rs. 1,400 and for dinner Rs.1,585, plus taxes.

* Madhuban Resort & Spa, Vallabh Vidyanagar, Gujarat: It is hosting a special midnight buffet at its multi-cuisine 24x7 Coffee shop this Navratri. There is a variety of biryanis and desserts along with an assortment of sandwiches. All this for Rs.449 plus taxes.

Conclude your day with something sweet. Gelato Vinto, which has outlets across the country has something to offer for all those who have a sweet tooth. One can go for freshly-made 100 percent vegetarian varieties like lime basil sorbet, strawberry sorbet, kiwi sorbet and vanilla pod. The price starts from Rs. 49 onwards.