The Biggest Naan the World Has Ever Seen! 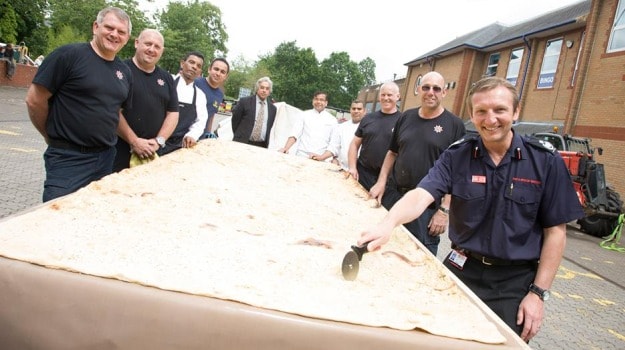 A 26-kg naan bread made by British firefighters has been confirmed to be the biggest the world has ever seen, eclipsing a record set in 2008 in Canada. Led by fire officer Dave Curry, the team created a giant Indian bread, weighing 26kg (57lb 5oz) and measuring 3.79 metres by 1.4 meters.

The cooking feat, carried out at the 'Eastleigh Mela' in Hampshire on July 6, was confirmed as successful on Tuesday by the Guinness World Records. This beats the 2008 record naan, which weighed 9.5 kg, the BBC reported.

That creation was cooked by Loblaw Companies Limited in Brampton, Ontario, Canada and measured 2.89 meters by 1 metres. "This was a genuine team effort, with great commitment shown by all involved," Curry had said in July last.

"As well as the fun side of achieving the record and the added value of raising money for worthwhile charities we also showed the great relationships we have in the area to make things happen in the best interests of our communities," Curry had said.

The Hampshire firefighters' enormous naan bread, which was sold for 3 pounds per portion with a curry, helped raise money for The Fire Fighters Charity, Water Wells Project and Hampshire Hurricanes. The record-breaking naan was created with the help of two local Indian restaurants -Badi Mirchi and Sanjha.