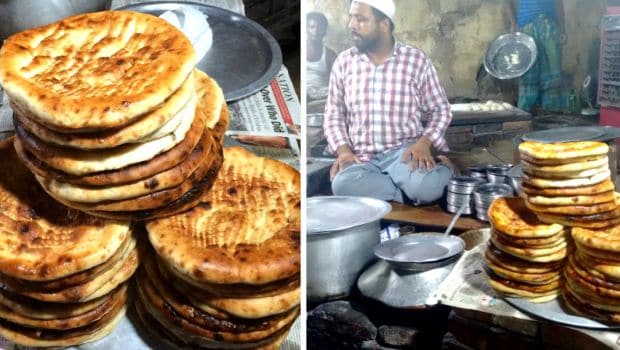 While poori, paranthe and phulka have been amongst the oldest flat breads of India, the tradition of tandoor-baked breads came into the Subcontinent only in the Medieval period with the advent of the Turko-Afghan rulers. Naans and tandoori rotis may now be popular as restaurant foods that in countries outside India, people recognise these as the only breads from the Subcontinent, but the first reference to naan-e-taanur was only found in the works of Amir Khusrau in the 13th century during the Khilji period in Delhi.

Mughal Delhi, in the subsequent centuries, saw a rich bazaar tradition of naanbhais, or bread bakers, from who households and caterers would order their breads daily. This was pretty much like other cultures in central Asia (and Europe), where bread till today is not baked at home but fetched from the market. Till even two decades ago, shaadi caterers from Shahjahanabad, restaurants and bhatiyaras (cooks who worked at the bhatti, or the indigenous oven) ordered their breads from the naanbhais and used these at large caterings. Breads like the khameeri roti, kulcha (that you eat with nihari and matara alike) and so one owe their origins to this medieval tandoori tradition of the common man.

Sheermal, that beloved of connoisseurs, however, is a more regal bread with slightly different origins. In the bazaars of Lucknow, this would just be the right time to go looking for some, to be had with spicy qormas and kebab as the devout break their Ramzan fasts every evening and the gourmand simply go looking for epicurean pleasures. The Persian tradition is at once apparent even as you take your first bite of the slightly sweet bread. There is the richness of saffron, of milk and ghee mixed into the dough (made from refined flour - maida) that suggests the refinement of the Persian culture (that influenced much of the Arabic world and seeped into India's syncretic fabric through the Mughal kitchen and later through the kitchens of the Nawabs and the Nizams). Both saffron and a tinge of sweet (though no sugar is added in the original recipe) in the bread are giveaways to this Persian connect.

Sheermal, as its name suggests ('sheer' meaning milk and 'mal or maal' meaning loosely connoting "rich food"), was an upper class food tracing its history to the Nawabi kitchens and those of the Avadh aristocracy. Initially, chefs and accounts suggest, it was made on a hot iron griddle and was not really a tandoor/bhatti baked bread which would have suggested a more plebeian origin.

As a slightly sweet and soft bread, this was perfect contrast to the spiced but delicate stews of Awadh and to Shami Kebab. That tradition still continues. Because it used ghee in the dough, it could be reheated on the tawa in the mornings and made for a breakfast dish in itself, with tea or milk-much like the parantha of upper class Hindu homes.

Today, however, it is bazaar-baked and many different recipes have crept up in different parts of the country. I asked Awadhi chef Mujeeb Rehman, who is quite popular with his caterings in different hotels and runs a restaurant in Lucknow, for the ingredients that go into a legit Sheermal and he told me: maida, saffron, milk, ghee with a pinch of baking soda. This last, used as a leavening agent to make the Sheermal softer, seems like a recent addition to the recipe by chefs. Jiggs Kalra's meticulously researched cookbook on Awadh has a recipe that uses flour, sugar, milk, ghee, saffron and two drops of kewra essence (another quintessentially Awadhi aromat, but which in my opinion should be optional here) without the pinch of baking soda. As far as I can tell, this recipe seems the most accurate and in keeping with the historicity of the bread.

Leavened bread did not make an appearance in India until the time of the Europeans. Pao in Goa and the subsequent "Double Roti" (because the bread expanded to double thanks to yeast action) are the two examples of this mixed tradition. Sheermal may have begun as a home, unleavened bread and then gradually turned into a slightly leavened one in the bazaars as the Colonial culture met the older Mughal one.

I have also always been confused by the Baqarkhani and the Sheermal. One is supposedly Hyderabadi (an invention of one baqar mian, naan bhai), the other Avadhi. One is without saffron, the other with saffron. And one has a few extra ingredients (like khus khus and melon seeds in the baqarkhani) than the other. Different people extol the virtues of these different breads. But to me both have always really seemed the same, barring a few superficial differences.

The Baqarkhani, according to chef Mujeeb Rehman, was innovated upon in Hyderabad and was always a baked bread, made in the bhattis. It also uses fresh yeast and baking powder for leavening. So, here's what I think must have happened:

The world of food is always about constant innovation. Historically, we can trace the evolution of some of our most popular dishes as such. To my mind, the Baqarkhani is an upgraded Sheermal-brought about in a slightly later period historically by professional cooks who were already aware of the Persian Sheermal. So to the basic recipe, they added other ingredients from the region and of the time. Melon seeds (Pratibha Karan's excellent cookbook on Hyderabadi food mentions sunflower seeds though) and poppy seeds are both clear additions to a homely dish to make it more exotic. Karan's book also mentions the addition of rasins and almonds-further enriching a recipe.

But the biggest difference between the Sheermal and the later-day Baqarkhani is in the leavening action. Chef Rehman's recipe also uses an egg in the dough, though the Karan one doesn't. But both breads are baked, never cooked on the griddle. The Baqarkhani, as you can expect, is thus also crustier than the softer Sheermal, an effect sought by cooks who must have wanted to incorporate the European bread tradition (of paos and buns) into their own recipe. By that hangs a culinary tale.

I am a Sheermal fan though. That's the simpler, elegant bread I will be exhorting someone to bring back from Lucknow. May be, you should too!