Video: Ishaan Khatter Reacting To His Decadent Birthday Cake Is All Of Us! 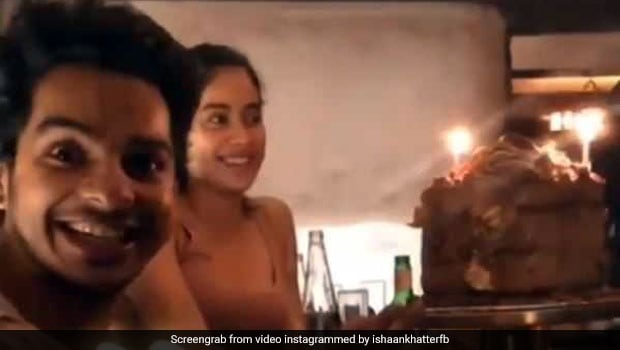 Bollywood actor Ishaan Khatter turned 23 on Wednesday. Even as the interwebs filled with wishes for the dashing youngster, his brother Shahid Kapoor and sister-in-law Mira Kapoor celebrated his birthday with a simple dinner at the popular restaurant The Bastian in Mumbai. The restaurant is the haunt of many Bollywood celebrities, who have been spotted dining there, including Student Of The Year 2 actor Ananya Panday recently. Chef Kelvin Cheung of The Bastian is famous for serving the most decadent birthday cakes and desserts and he made one for Ishaan Kahtter last night. Khatter, who comes across as a foodie, was visibly excited by the sight of the huge and delicious-looking birthday cake. Fortunately, Mira Kapoor was able to capture his reaction and posted it on her Instagram stories, making us like Ishaan Khatter even more than we did before!

All of us know that feeling of unboxing a perfectly beautiful and yummy-looking birthday cake, knowing that we're going to be stuffing out faces with it, in some time. Well, that's probably what prompted the happy and excited reaction from Ishaan Khatter, when his birthday cake was brought in for him. He seemed to be freaking out, even as Shahid Kapoor, Mira Kapoor and Janhvi Kapoor looked on.

Have a look at the video:

Isn't this video just the happiest one you've watched today? Work wise, Ishaan Khatter has much to celebrate as well. The newbie's first Bollywood project as a main lead, Dhadak, where he starred opposite Janhvi Kapoor, has been a hit at the box office, with great reviews pouring in from all over the world. The film that was directed by Shashank Khaitan was a remake of the Marathi blockbuster film Sairat and is a story of two star-crossed lovers, who elope in order to escape caste divide in their home town.