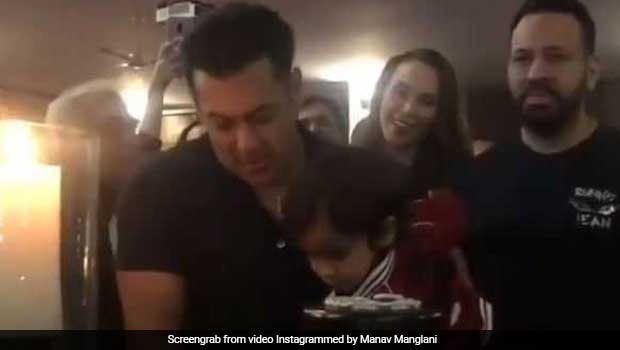 Bollywood superstar Salman Khan turns 53 today and his fans from around the world are celebrating the actor's birthday. Wishes from fans and Bollywood lovers have already started flooding the internet, and even pictures of stars attending his birthday bash have started doing the rounds. Khan reportedly began birthday celebrations early by throwing a party for his friends and colleagues including actors like Jacqueline Fernandez, Sonakshi Sinha, Mouni Roy, Warina Hussain, Dia Mirza, Bobby Deol and others. The bash was held at Salman Khan's farmhouse in Panvel outside Mumbai and was attended by a number of Bollywood bigwigs and actors. Salman Khan's family, including brothers Sohail and Arbaaz Khan, as well as sister Arpita Khan Sharma were also in attendance. Arpita came along with her husband and actor Aayush Sharma and their son Ahil. In fact, Arpita Khan had especially got her brother's cake from one of the most famous bakeries in Mumbai- Le 15 Patisserie.

Salman Khan cut his birthday cake with his tiny and adorable nephew Ahil Sharma and the video of the cake cutting ceremony was posted on Instagram by Bollywood reporter Manav Mangalani. In the video, Salman can be seeing holding Ahil in his arms while cutting the cake, while his friends sing the birthday song for him. Little Ahil was seemingly quite excited to be cutting the beautiful four-tiered cake.

As a tribute to Salman Khan, Pooja Dhingra- the founder of Le 15- shared a number of pictures of Salman Khan's birthday cakes from this year, as well as from the past few years. Dhingra thanked Salman Khan's sister Arpita Khan Sharma in the caption saying, "Thank youuuuu @arpitakhansharma, this is a @le15india December tradition since 2012. Happyyyyy birthday @beingsalmankhan".

Take a look at Salman Khan's birthday cakes from Le 15: