What will food without trans fats taste like? Just the same 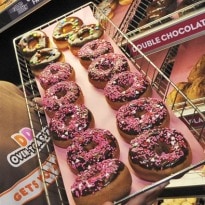 Artificial trans fats -- widely considered the most dangerous of the so-called bad fats in the American diet -- were officially shown the door by the Food and Drug Administration this week, but the truth is most food manufacturers and restaurants started the eviction process years ago.

The trans fat purge began when federal officials first took aim at the ingredient more than a decade ago, but hit critical mass when trans fat content was added to nutrition labels on packaged foods in 2006. As consumer awareness grew, companies worked fast to reformulate products to reduce or eliminate trans fats, which are considered unsafe at any level.

The restaurant industry wasn't far behind, particularly after New York City banned trans fats from all restaurant food in 2008, with communities around the country following suit. Rather than grapple with a patchwork of regulations, major chains like McDonald's, Taco Bell and Burger King decided to remove trans fats from their menus nationally.

You'd think we would have noticed. After all, trans fats can play a significant role in a food's texture, structure and taste. Like butter -- but more cheaply and with better shelf life -- they put the flakiness in flakey pie crusts, and Americans baked with them in the form of Crisco (also now free of trans fats) for generations.

But there are lots of alternatives, and companies simply had to test their way through them until they found the right one for their products.Dunkin Donuts, for example, began testing dozens of alternatives in 2003 before settling on a blend of palm, soy and cottonseed oils. Before they made the switch official in 2008, the company sold some 50 million trans fat-free doughnuts -- all unbeknownst to consumers.

The change also can be seen in many products found in home kitchens. For example, many brands of classic trans fat culprits such as microwave popcorn and frozen pizza have already been reconfigured. Nutrition labels for other products showed that some, such as Duncan Hines chocolate Whipped Frosting, have yet to eliminate them.

Listen to the latest songs, only on JioSaavn.com
All of which means the FDA announcement won't much change the taste of the foods Americans love. The most significant effect will be to close what health advocates have called a loophole in the labeling law, which allows foods with less than half a gram of trans fats per serving to be called trans fat-free. It also effectively eliminates the ingredient from use by smaller restaurants.

Photo: Consumers wondering what food without trans fat will taste like, probably already know as food manufacturers, including Dunkin' Donuts, began eliminating it years ago.