Who Knew Radishes Could Be Black, and Soothe A Cold? 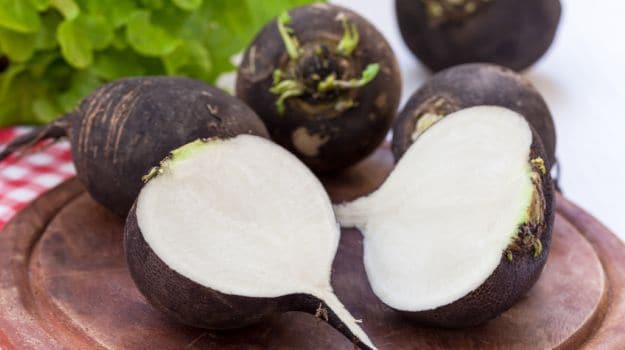 A few years back, a woman called, begging to come out to my brother's farm and buy 10 pounds of black radishes. We often get people asking for extra melons, or tomatoes, or even spinach, but someone desperate for black radishes, and a whole bag of them, was a new one. While the roseheart radishes sell themselves once we cut them open to reveal their bright ballgown-fuschia flesh, the sooty black orbs tend to languish like Cinderella in the ashes.

When I asked the woman why she needed them so urgently, she explained that her son had a bad cold with a sore throat and cough, and she knew from prior experience that the best remedy was black radishes. This, too, bore further investigation, so when I met her and handed over the coal-black radishes, I asked what she was going to do with them.

She described how she would slice off the top and tail, place the radish root side down on the counter and use a small paring knife to hollow out a depression large enough to hold a tablespoon or more of honey. Once that hollowed out spot was filled with honey, she placed the radish in a glass so that the roundest part fit snugly and held it suspended.

"Let it stand overnight, and in the morning, there will be honey-sweetened radish juice in the glass. Drink it and you will feel better!"

She mentioned that another way to make the same cold remedy in larger amounts was to cut the black radish into small cubes, put the cubes in a jar, and cover them with honey. Let it sit a day or two, and then take a tablespoon of the honey-radish mixture as needed for your cold or cough.Of course this sounded like an old wives' tale. But old wives' tales exist, and persist, because they have at least a grain of truth, and often much more. A bit of research showed that one black radish has more than the recommended daily allowance of vitamin C, about 25% of the RDA for potassium, plus good amounts of magnesium, iron, sulfur and other nutrients. So the next time I found myself coming down with a cold, I prepared the black radish and honey concoction, and am happy to report that I am a believer.

It turns out that the black radish (Raphanus sativus varieta niger L.) has a long history of medicinal uses. In ancient Egypt, it was considered sacred and used together with garlic to create a one-two punch to knock out just about any bad bug. In Ayurvedic healing practices, radishes are said to have cleansing effects, helping break down and eliminate toxins and cancer-promoting free radicals. Black radishes have been used as a remedy for respiratory problems in Asia for thousands of years, and in Europe for hundreds of years.

But black radishes are not just medicinal. Along with other winter radishes, they are quick and easy to prepare, and make for a light and lively, guilt-free side dish. Here are just a few ideas for starters.

Put a slice of radish on a bagel, with or without cream cheese. Shred them with apples, pears, carrots and/or fennel, and then sprinkle with herbs, or nestle in arugula for a refreshing salad. Make a topping by grating the radish, adding finely chopped onion, salt, pepper and olive oil. Mix well and let sit for about an hour for the flavors to meld. Serve on crackers or toast. Grate the radish into scrambled eggs.

Chunk up the radishes and braise in a crockpot with a roast or stew meat. Slice thinly, toss with oil and salt, and bake on a cookie sheet until crispy. Chunk up, toss with oil, salt and herbs, and roast with other root vegetables. Cut into matchsticks, and add to a stir-fry.

With their high water content, winter radishes are also a dieter's delight, with only about 20 calories per cup. But in that serving is plenty of fiber, vitamin C, folic acid, potassium, magnesium, phosphorus and zinc to nourish your body and hydrate your skin. And all that health and nutrition come in beautiful packages, from basic black, to classic white (daikon), to bright green (greenheart), to lovely lavender (Korean purple), to brilliant fuschia (roseheart, beauty heart or watermelon radish).

Promoted
Listen to the latest songs, only on JioSaavn.com
If you can't find these radishes at your regular grocery store, try an Asian grocery, or a winter farmers market. When you do find them, you might as well get a big bag full, because in sickness or in health, you'll find winter radishes to be versatile, nutritious and delicious.