Why Men Should Eat Spicy Food 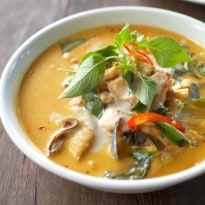 His wit, candor, personality and elegant charm aren't the only things that make him an alpha male. It's also his love for hot sauce! According to a group of French scientists at the University of Grenoble, regular consumption of fiery, chilli-infused spicy food raises a man's testosterone levels making him more adventurous, aggressive and sexually active.

The study titled 'Some Like it Hot' ventured into finding a link between spicy food and testosterone, the hormone that makes a man, truly manly.

The study that is soon to be published in the American journal 'Physiology and Behavior' observed 114 men between the ages of 18 and 44. These men were served a dish of mashed potatoes and were allowed to season it with as much chilli sauce as they wanted. Then, their testosterone levels were measured with the help of their saliva samples. Interestingly, researchers found that men who added chilli sauce in high quantities had the highest levels of testosterone.

According to Laurent Begue, one of the authors of the study, "The hormone drives men to seek thrills and new sensations, leading them to frequent more stimulating social groups and taking more risks. In this case, it applies to risk-taking in taste. It's also possible that the regular consumption of spicy food contributes to increasing testosterone levels, although so far this has only been demonstrated on rats." (as reported in Telegraph.co.uk).

In a 2013 study, mice were exposed to capsaicin (the element that makes food spicy) over a period of time and it was found that eating chilli increases the level of testosterone, particularly when it has been part of a person's regular diet during adolescence. While the exact mechanism behind the spiked level of testosterone in this new study remains a mystery, the author does not discount the involvement of other factors - genetic make-up, physiological, psychological and even situational. All or any of these could influence a man's choice of spicy food. The relation between hot sauce and women is yet to be explored but hopefully this study will give men enough reason to spice-up their food.