Why Pyongyang's Restaurant Scene is Thriving 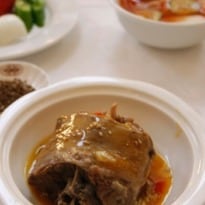 A recent boom in semi-private eateries in North Korean capital means good food is easy to find for those who can afford it - and know where to look, says Andrei Lankov

While malnutrition is widespread in North Korea, the restaurant scene in Pyongyang is thriving. It is never a problem to find a really good meal if you can afford it - and you know where to look. The newer, semi-private eateries tend to keep a low-profile, and often have their windows covered with heavy curtains. The signboards are also small, if not absent, so outsiders would have few clues of the luxury inside.

Most new restaurants have private rooms used for closed banquets of the bureaucrats and new rich - which are closely connected but somewhat different groups. In some cases they do not limit themselves to gastronomical pleasures: several places have a reputation for doubling as elite brothels. This was indirectly confirmed by official North Korean documents recently: when Jang Song Taek was purged in December 2013, the indictment mentioned both his fondness for private rooms in the expensive restaurants and his dalliances with women.

For the average North Korean, restaurants are prohibitively expensive

All these pleasures might appear cheap for a visiting foreigner, but for the average North Korean restaurants are prohibitively expensive. A dinner in a regular upmarket restaurant would cost about $7-10 (excluding alcohol), but the most expensive places charge around $30-40. To appreciate how out of reach this is, remember that the average monthly salary of a university professor in North Korea is about 80 cents. In most cases, the consumers pay in foreign currency, usually Chinese yuan, which has long been a currency of choice in the up-market North Korean shops.

Culinary delightsPyongyang has its share of restaurants serving foreign cuisine - one can enjoy Japanese sushi and assorted Chinese dishes as well as European-style food. A local Pyongyang pizzeria serves Italian dishes which can be eastern while listening to fashionable western music. Near Juche Tower the affluent and well-connected (as well as foreigners) can enjoy a great variety of beers in a pub with its own micro-brewery. The connoisseurs have assured me that the quality equals the best European microbreweries.

Yet it seems that North Korean-style cuisine still reigns supreme. The Korean food on offer in the North is different from the fare that can be found in the South. I prefer the Northern version, finding it less spicy and far more varied than its Southern counterpart. As for the quality, an American of Russian origin who had spent long time in Pyongyang once said: "I cannot recall a single case when I had a bad meal in a Pyongyang restaurant."

The two most well-known old North Korean restaurants are Okryugwan and Ch'ongryugwan. Both first appeared in the 1960s to showcase North Korea's alleged prosperity - those days are still remembered in the North as days of lost affluence. These restaurants are also seen as living museums devoted to traditional Korean cuisine. As a result, chefs are sometimes sent to the countryside to collect recipes and study traditional ways of cooking.

Both Okryugwan and Chonryugwan remain state-owned enterprises, but this is slightly unusual nowadays: over the last decade or so a large number of smaller restaurants have begun to pop up. These newer restaurants, while still technically registered as government-owned, are actually run by private investors. They seem to be doing very well - perhaps better than their state-managed rivals.

Traditionally, the large international hotels also had restaurants which catered for the guests as well as to those lucky few North Koreans who were allowed there. These old restaurants still operate, but it seems that the newly opened rivals have pushed them aside to some degree.

If we look at the menu of those restaurants which specialise in the Korean cuisine, we discover that many of the dishes are different from what one can get in a typical South Korean restaurant. To start with, the North Korean variety of haute cuisine has been strongly influenced by the traditions of Russian cuisine. In an average North Korean high-end eatery many of the dishes on offer clearly have Russian origins. This is obvious to the present author, being a Russian, but probably not to the average North Korean customer.

For example, these restaurants serve Russian-style heavy salads that are flooded with mayonnaise and other similar oily and fatty sauces. The "potato salad" is a common feature in North Korean restaurants' menu, but few Russians would fail to recognise its actual origin as "olivier salad" ubiquitous in Russian eateries.

Of course, the North Korean elite likes to feast on meat. In the South it is beef that is most coveted. In the North, beef is simply beyond the reach of almost everyone. Technically North Koreans are banned from eating beef because cows and oxen are used as draft animals not a source of animal protein (you don't eat your tractors, do you, the logic goes.).

Like South Koreans, people in the North are big fans of the barbecue. But instead of fresh rib meats (known as kalbi in the South), North Koreans tend to prefer marinated varieties (known as pulgogi, still popular in the South, but less so). As with South Korea, North Koreans grill their meat themselves over a charcoal fire or small gas stove installed in the tables at the restaurant.

Another North Korean dish is sinsollo, which is somewhat reminiscent of South Korea's shabu-shabu. In the restaurant, customers are supplied with a pile of raw vegetables, meat and dumplings, as well as with a pan filled with water and a coal fire that heats the pan). You boil the food in the water.

While the new rich feast on pork and chicken, their children are fond of cheap (and seriously unhealthy) sweets imported mainly from China. Obesity is said to be an increasing problem among the elite North Korean children and teenagers. It is not incidental that Choco Pies have become tremendously popular in North Korea. They have become not only a treasured present but also a sign of success.

In the future the offspring of successful North Koreans - predominantly operators of semi-legal private businesses and corrupt bureaucrats - will look at their grandparents' diets with horror. But at the moment the elite still follow the age-old paradigm: if you afford to consume many calories, do it for as long as possible.

And consume they do. High prices do not stop them from crowding the more fashionable eateries, and their success is prompting more and more entrepreneurs to try their luck by opening yet another restaurant somewhere in downtown Pyongyang (of course, the restaurant is prudently registered with the local municipal authorities).