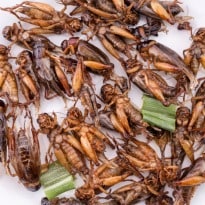 From bizarre beings to a food fad, insects have crawled their way to fame. We've been fed with various studies on how insects give fresh health hope and can be a serious solution to the pressing problem of global food security. To reiterate, insects are a great way to add low fat protein to your diet, they are found in abundance and provide for an environment-friendly alternative to meat. Amidst all the buzz that bugs are creating, comes another strange tale.

In a recent Chinese Space Programme experiment, three volunteers survived on a worm diet for more than three months! The experiment concluded that humans can endure long space journeys with a diet that includes insects. Nothing to squirm about. It's food, but not as we know it.

The worm diet was first proposed by Chinese scientists in 2009, so as to combat the food woes that astronauts have to deal with on longer space journeys. During the study, the participants were enclosed in the Moon Palace One, a man-made biosphere at the Beijing University of Aeronautics and Astronautics, which is China's largest facility that develops self-sustaining life support systems in space.

Listen to the latest songs, only on JioSaavn.com
The volunteers spent 105 days on a diet which included the larvae of a beetle called Tenebrio. Interestingly, none of the volunteers had eaten worms before. The diet was not completely based on insects, 45 percent of the meal was supplemented with vegetables which were grown in the same controlled atmosphere. With a favourable result, scientists are now planning to conduct another experiment based on a 100 percent larvae diet.Due to dietary restrictions and storage issues, astronauts still can't eat whatever they want. Even with technology enjoying its moment in the sun, an astronaut's diet remains to be a major challenge for space explorers.