A Father's Diet Can Determine a Child's Health 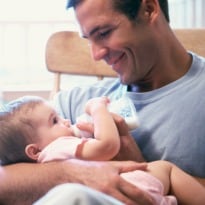 We all know how crucial a pregnant woman's nutrition is for a healthy new born. Now, consider father's diet and weight equally important. According to a new research, obese fathers cause altered gene expression in pancreas and fat of offspring - possibly leading to diabetes, obesity, chronic degenerative disease and premature aging.

There is a biological link between paternal diet, bodyweight and health at the time of conception and the health of his offspring, said a study published in the FASEB Journal.

Scientists showed that if male rats ate a high fat diet, had diabetes and were obese, their offspring had altered gene expression in two important metabolic tissues - pancreas and fat.

"This altered gene expression may increase the risk of future obesity and premature aging. Other genes that were affected include markers of premature aging, cancer, and chronic degenerative disease," said Margaret Morris, a researcher at University of New South Wales in Sydney, Australia.

"This study is part of an exciting new research exploring the impact of paternal diet on offspring risk of obesity," added Morris.

To make this discovery, Morris and colleagues used two groups of male rats, one of which was obese and diabetic and fed a high-fat diet and the other was lean and healthy and fed a normal diet.

The two groups were mated with lean female rats and researchers examined their female offspring. Those who were born from obese fathers on a high-fat diet, showed a poor ability to respond to a glucose challenge, even while consuming a healthy diet.

Specifically, the offspring of the obese rats showed gene expression changes in pancreatic islets - responsible for producing insulin to control blood glucose and the fat tissue of their female offspring.

"This report is the first step in understanding exactly how the nutrition and health of fathers affects his children, for better or worse," said Gerald Weissmann, editor-in-chief of The FASEB Journal.

Check diabetes with a nutrition therapy