A Handful of Pistachios May Work Wonders for Diabetics 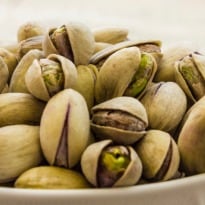 Pistachios have long been praised for their health benefits. A lot of research has been done previously to explore the link between consumption of pistachios and blood sugar levels.

This latest study adds to the existing theory, the results of which appeared in the Journal of the American Heart Association. According to this research, eating pistachios may reduce the vascular (relating to blood vessels) response to stress in type 2 diabetes.

Type 2 diabetes is the most common form of the disease characterized by high blood sugar levels due to insulin resistance. Obesity is thought to be the main risk factor of developing type 2 diabetes. The study showed that two serving of pistachios, consumed by diabetics everyday, lowered the body's response to stress and improved heart functions.

According to Sheila G. West, Professor of Biobehavioral Health and Nutritional Sciences, "In adults with diabetes, two servings of pistachios per day lowered vascular constriction during stress and improved neural control of the heart."

Although nuts are high in fat, they contain good fats, fibre, potassium and antioxidants. "Given the high risk of heart disease in people with diabetes, nuts are an important component of a heart healthy diet in this population," West added.

The study was conducted on patients with type 2 diabetes to examine the effects of pistachios. The patients were directed to follow one of two test diets - a standard heart-healthy diet with 27 percent fat and seven percent saturated fat and a diet containing two servings per day of pistachios, about 3 ounces or 20 percent of calories from pistachio nuts.A typical research participant consumed about 150 pistachio nuts per day.The pistachio diet contained 33 percent fat and 7 percent saturated fat. "After the pistachio diet, blood vessels remained more relaxed and open during the stress tests," West said.

Listen to the latest songs, only on JioSaavn.com
They found that systolic blood pressure during sleep was particularly affected by pistachios. "Average sleep blood pressure was reduced by about four points and this would be expected to lower workload on the heart," West noted. The researchers also recorded improvements in heart rate variability, a measure of how well the nervous system controls heart function.