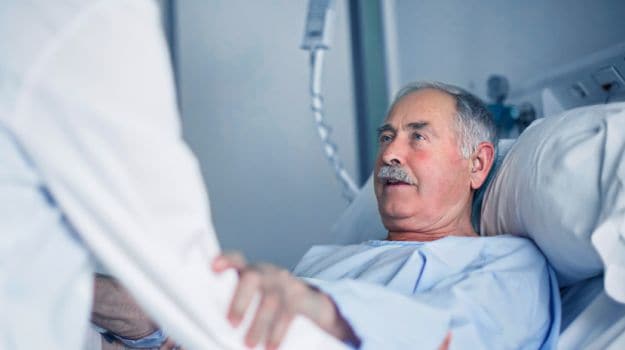 Highlights
Before dinner on July 29, 3-year-old Carter Roberts of Chesterfield, Va., seemed perfectly healthy. That evening, he vomited. When he woke up the next morning with a slight fever of 99 degrees, his mother, Robin Roberts, figured that he was coming down with a cold. The next morning, she found him collapsed on his bedroom floor.

Carter could barely stand when she picked him up, and his neck was arched backward. "What was most alarming," she said, "is he had no control over his right arm whatsoever."

In the hospital, Carter lost control of his right arm, then over his legs and other muscles within a few days. He now can only wiggle a toe and move the left side of his face. He has been diagnosed with a mysterious, polio-like illness called acute flaccid myelitis, a condition that seems to be surging this year.

Through July, 32 new cases of AFM have been confirmed across the United States this year by the Centers for Disease Control and Prevention, a sharp rise compared with last year, when just seven cases had been confirmed by that month. The numbers have risen steadily since April. In past years, most cases have occurred between August and December, with a peak in October.

Among the many unanswered questions about the condition are what causes it, how best to treat it and how long the paralysis lasts. Although most cases occur in children, AFM occasionally affects adults.

The CDC official who leads the surveillance efforts said that confirmed numbers for August will not be available until the end of this month, but the number of reports she is receiving from doctors around the country continues to rise.

"CDC is looking at these trends very carefully," Manisha Patel said. "We have sent out several health alerts to states to let them know we are seeing an increase in reporting and to encourage them to communicate with doctors to report these cases in a timely fashion."

The CDC began tracking AFM in 2014, when 121 cases were confirmed. That year, the CDC counted only children affected by the disease. Their average age was 7. Most had a fever or a respiratory illness a few days before developing paralysis. Many had to be placed on respirators. Although 85 percent of the children recovered partially, only three of them recovered fully.

Health officials and physicians around the country said they are concerned that the rising number of cases through July could foretell a repeat of 2014.

"You hate to be an alarmist, but there's reason to have some concern," said Avindra Nath, chief of the section of infections of the nervous system at the National Institute of Neurological Disorders and Stroke. "What we don't know is where are these cases. Are they clustered? Do they all look alike? Getting more information on these cases would be helpful."

Beyond saying that confirmed cases have been reported in 17 states through July, Patel declined to reveal which states have been involved. But conversations and emails with physicians around the country indicate that at least four cases have occurred in California, at least three in Massachusetts and that others have been seen in Florida, Texas, Pennsylvania and New York, as well as Virginia.

"We are definitely hearing of cases from our colleagues across the country," said Teri Schreiner, a neurologist at the University of Colorado and Children's Hospital Colorado. "It's a trend that's worrisome what I'm hearing from others seems to be coming at a tempo similar to what happened in 2014."

Jean-Baptiste Le Pichon of Children's Mercy Hospital in Kansas City, Mo., said he subscribes to a U.S. email list for pediatric neurologists, and that doctors on it reported five new cases of AFM in just the past few days. "There is definitely an explosion of cases," Le Pichon said.

No treatment other than physical therapy has yet been shown to markedly improve outcomes, although some doctors have reported that treatment with intravenous immunoglobulin (IVIG), used to treat some other viral infectious diseases afflicting the nervous system, might help. It's also been suggested that Prozac could prove beneficial. The degree of paralysis in the first month has generally improved only slightly over the course of a year.

"After about a year or so, what you've got is what you've got," said Max Wiznitzer, a pediatric neurologist at Case Western Reverse University in Cleveland.

Most perplexing is what causes the disease. The 2014 outbreak of AFM occurred at the same time as a far larger outbreak of enterovirus D68 across the United States. The vast majority of patients infected with the virus developed only a respiratory illness. Some physicians were convinced that EV-D68 was the cause, not only because both outbreaks occurred at the same time, but also because of a study that identified a particular strain of EV-D68 in the airways of children with AFM. But officials at the CDC and some doctors, including Wiznitzer, insist that the cause remains unproved.

So far this year, no similarly widespread outbreak of EV-D68 respiratory infections has been reported, although cases of it and other enteroviruses have been seen in some areas.

Friday, Le Pichon, in Kansas City, said, "I just got confirmation that we have an epidemic of enterovirus breaking out here and at least a few cases [of enterovirus] have typed positive for EV-D68."
Carol Glaser, a pediatric infectious disease specialist at Kaiser Permanente in Oakland, Calif., said: "If the theory is right that it's caused by EV-D68, which some of us believe more than others, this would be the time of year we start seeing it. It's an enterovirus, and they tend to peak in late summer and early fall."

Because the CDC's surveillance of AFM is still less than two years old, it remains unclear if some of this year's apparent rise in confirmed cases is due simply to more doctors sending in case reports, Patel said. And Wiznitzer emphasized that with just 32 confirmed cases across the United States so far, AFM remains extremely rare

Glaser, however, said she is convinced that the condition is new. She worked at the California Department of Public Health when, in 2012, some of the first reports of AFM anywhere in the country came in from physicians there.

"I was there for 15 years and talked to neurologists every single day," she said. "It wasn't until the fall of 2012 when the first physician called in and wanted a test for polio on one of his patients. One of my colleagues in the office chuckled and said to me, 'We don't have polio in the United States.' But in the next two weeks, I got two very similar phone calls. We had never had a report like that. I do think there was something new going on. Fortunately, it's still rare."

If EV-D68 does somehow cause AFM, studying the virus may lead to prevention or treatment. One glimmer of good news came from Kenneth Tyler, chair of neurology at the University of Colorado School of Medicine. He and his colleagues have been conducting experiments to infect mice with EV-D68 and have them develop loss of muscle control like that seen in AFM. He says he has submitted a paper to a peer-reviewed medical journal describing his success in doing so.

The goal, he said, is to use mice to study how EV-D68 causes harm to the spinal cord and muscles, and to test potential therapies, such as IVIG.

"It looks like we're seeing protection with IVIG in the mouse model," he said.

Robin Roberts said she wishes more was known about the condition that has harmed her son. "In this day and age to not have information about something like this is very frustrating. There needs to be more done about it, and for more parents and doctors to know about it," she said.

Angie Andersen said that her daughter McKenzie was sent home from the hospital twice in the first two weeks of her illness because doctors did not understand the severity of what was happening. Finally her pediatrician told Andersen to bring McKenzie to another hospital.

McKenzie was 6 years old when she developed sniffles in December 2014. "Within 12 days," Andersen said, "she was paralyzed from the neck down on a ventilator to breathe for her. She was left with her left hand and her feet and toes that move."

"You know you could understand the bad that comes from a car wreck, or if she got cancer," Andersen said. "How do you ever wrap your brain around the fact that she got a cold, and now she's a quadriplegic on a ventilator. It's a nightmare you never wake up from."

Promoted
Listen to the latest songs, only on JioSaavn.com
Still, she said, McKenzie can now speak and even sing softly despite having a tracheotomy. "She has a lot of spunk, and that is helping her through," Andersen said.